The End Of The Galloping Ghost 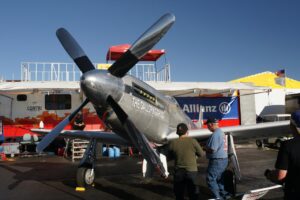 James Kent “Jimmy” Leeward was an American air racer and owner of the Leeward Air Ranch in Ocala, Florida. He was also the owner and pilot of the heavily modified North American P-51 Mustang racing aircraft known as The Galloping Ghost. Leeward loved his plane, loved flying, and especially loved air racing. He loved the thrill of the air shows and putting his plane through its paces. The Galloping Ghost was an amazing aircraft that held various airspeed records. It was also the plane whose fatal crash in 2011 led to several changes to make air shows safer.

The Galloping Ghost was built in 1944 by North American Aviation for the Army Air Force. Following its successful service during World War II, the plane was sold as postwar surplus. It was modified and raced by a series of owner over the next half-century, including finally, Aero Trans Corporation in Ocala, Florida. Jimmy Leeward was born on October 21, 1936, in Brackenridge, Pennsylvania to parents Albert and Mary Leeward. He grew up around airplanes, sitting first in the cockpit with his dad as just a toddler. The age of 11 or 12 found him often flying a Piper Cub with his father. At age 14, his father allowed him to fly solo in a North American T-6 Texan trainer aircraft. By age 18, he was

flying charters in a Beechcraft Model 18. While still in college, he flew a Formula One racer in the Fort Wayne air races. He was hooked on air racing from that moment on. In 1964, he was part of the crew on an airplane at the very first Reno Air Races. By 1976, being part of the crew would no longer do, and he first flew his P-51D Mustang “Cloud Dancer” in the Unlimited Class at Reno. In 1983, he purchased the P-51D racer “Jeannie” from Wiley Sanders. He never looked back, later becoming a movie stunt pilot. He was featured in such movies as Cloud Dancer, Smokey and the Bandit 3, Tuskegee Airmen, Thirteen Days, Dragonfly, Thunder Over Reno, Lonely Hearts, and Amelia.

I suppose that with any type of stunt performance, the very real possibility of an accident exists. Many people might assume that it is just a matter of time, but there is no real proof to that statement, just speculation. Nevertheless, on September 16, 2011, Leeward’s “luck” ran out. While he was in the middle of a race over Reno, Nevada, where it all started, Leeward’s racing days came to a tragic end. In the middle of the race, The Galloping Ghost suddenly veered off course. Leeward tried to regain control, but in the end, it was determined that the cause of the crash was “flutter.” Flutter is when the plane is flown faster than it is designed to go. 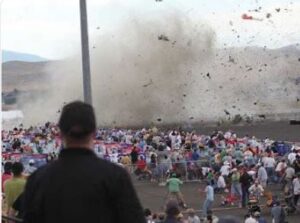 Leeward exceeded by nearly 40 miles per hour, the aircraft’s previous top speed without any previous testing to determine if the aircraft would be able to resist flutter at the new speeds. It couldn’t. When Leeward was unable to regain control, The Galloping Ghost crashed into the crowd at the National Championship Air Races at Reno Stead Airport, in a crash that killed him and 10 others. Additionally, 75 people were injured. An investigation by the National Transportation Safety Board blamed Leeward for “‘operating at the edge of the envelope’ without fully reporting and testing modifications to his plane.” Safety standards for air shows were significantly changed because of this crash. When he died, Jimmy Leeward was 74 years old.