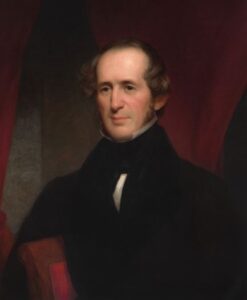 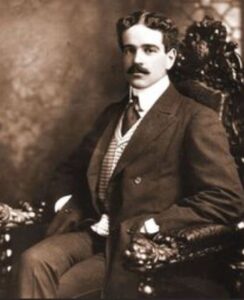 Like it or not, people are put into classes based on their income, and as we know, the elite are the very rich ones. Most people fall into the middle class, with a large group of people being in the poverty level. Many of the people in these classes spend their time working hard and sometimes living paycheck to paycheck, just trying to make ends meet. While those people are doing their best to survive, the very wealthy, also known as the Elite Class spend their time doing their very best to outdo each other. What a headache that must be.

During the Gilded Age, the Elite Class was in a particularly fierce fight for supremacy, not in politics or world economy issues, but rather in extravagancy. The Gilded Age took place from the 1870s to about the 1900s. During that time the Elite Class was building great estates with elegantly designed homes…trying to outdo each other while most Americans and Europeans struggled just to make basic ends meet. The Gilded Age elite struggled with one another, competing over who had the biggest, the most, the best…of any and everything. Anything that was outlandish, wild, shocking, or just plain spendy, was fair game in their “struggle.” The biggest source of extravagance was in their homes. Newport, Rhode Island, was prime real estate for the 19th-century one-percenters. Cornelius Vanderbilt constructed his famous 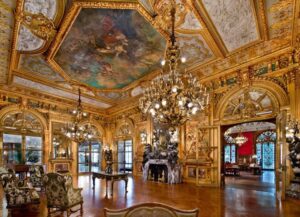 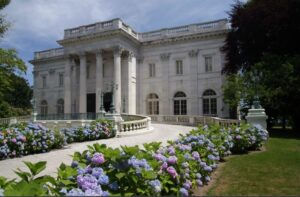 The whole production among the elites grew so fierce that home construction was covered in the local newspapers…on a daily basis!! The Newport Mercury reported that Marble House had 500,000 cubic feet of imported marble, as well as paneled walls portraying gods from the Classical age. Some walls were even coated in 22-carat gold leaf, all of it painstakingly applied by hand…not William K’s hand mind you. The latter Vanderbilt couldn’t sully his hands with the work of the common man. That was what his money was for…to underpay the common worker to build the elaborate house.

Yes, the whole age really was ridiculously extreme, but there was actually an ancient precedent that the Gilded Age families simply followed. Just take a look at the surviving Roman villas, the Versailles palace in France, and 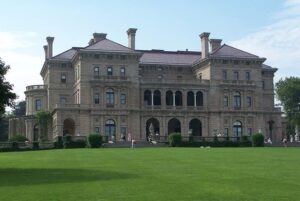 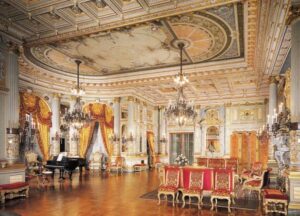 the Catherine Palace in Saint Petersburg, Russia. The rich and powerful have always felt compelled to put their wealth on display. They did it to show other powerful people that they could keep up with the rest, and to challenge them to take the game to the next level…a challenge they happily accepted. It was a wild time, and in many places around the world, the game continues.