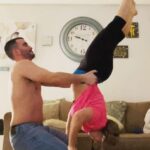 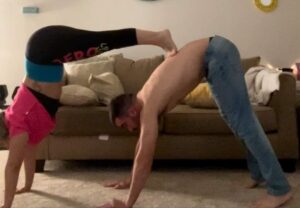 My grandniece, Siara Olsen met Chris Kirk in early September of 2021, when she boldly went up to him in the local Loaf and Jug convenience store in Casper, and told him that she liked his freckles. She started calling him her “Loaf and Jug Boyfriend” that very day. How could he resist that?? The year prior had been the hardest year Siara had ever faced, and when she met Chris, her joy returned. She once again became the happy girl we had always known and missed very much. I won’t go into the sadness of the prior year, because this story has a happy ending, and I will focus on that. Chris has the ability to put a smile on my grandniece’s face, and in my book that makes him a great guy. Chris fits well into Siara’s family, and she fits well into his. Theirs is going to be a wonderful and exciting future.

Siara and Chris have so much in common. They are both very athletic, and love doing te same activities. The 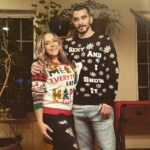 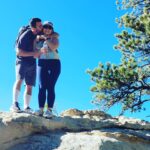 first pictures I saw of them together, believe it or not, they were doing a couple’s workout, and it was obvious that they were “head over heels” in love with each other. You never saw a picture of them where they weren’t smiling…unless they were making a face for the camera. They love to joke around, and their happiness just flows out of both of them.

Siara has long been a fitness buff, and Chris either is too, or he has become one since meeting her. They like to go hiking with Siara’s brother, Jake Harman, his wife, Melanie, and their kids, Alice, Izabella, and Jax. A favorite spot is the Bridle Trail on Casper Mountain. I like to say that families should work toward staying fit together, because it makes for a long and happy life. Hiking and hanging out with her brother’s family also gave everyone a chance to get to know Chris, and they all liked him too. Siara is close to her brother and his family, so that was important. 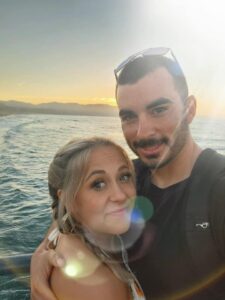 Chris surprised Siara when she had her back to him and he dropped to one knee, just as she turned around. His proposal was sweet and beautiful, and Siara was swept off her feet. I couldn’t say it better than she did, in her own words, “Turning around to you down on one knee asking me if I trust you with my life and my heart it was so easily a yes, but you asking me if I would marry you was the easiest yes of all! Our souls are so deeply connected through God already, but this makes it mean so much more. I love you more than anything, Chris Kirk!” It makes everyone in Siara’s family so happy to see these two tie the knot today. I wish you both all the love and happiness in the world. Congratulations Siara and Chris!! We love you both!!