Do Not Pet The Fluffy Cows 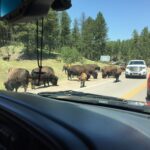 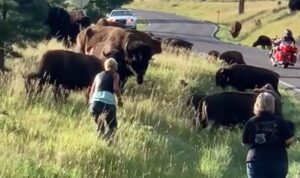 Every year, in areas where the buffalo roam, people get hurt. Most of the time, these attacks occur when people get too close to the buffalo. The big, clunky looking animals see like they would be very slow, and that can be deceiving for tourists who don’t know the reality concerning the buffalo. Every year, my husband, Bob Schulenberg and I find ourselves in a couple of places where the buffalo roam. We take a yearly trip to Thermopolis, Wyoming, and there is a buffalo reserve up there. We love to drive through it to try to get a glimpse of these magnificent animals. The buffalo up there are generally relaxing in the heat of the day when we go through, and they barely notice us at all, but then we don’t get out of the vehicle except on a trail that is located a way from the area the buffalo are. Nevertheless, if there were buffalo near the trail, we would pass on the trail.

The other place we go each year is the Black Hills of South Dakota. The is a wildlife reserve there, and while 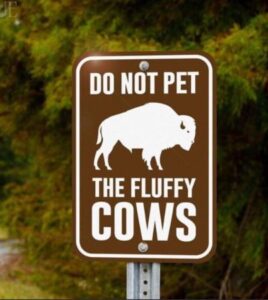 there have been years when we drove through and saw no buffalo, or saw some that were far away, there have been other years when we found ourselves sitting in the car for twenty or thirty minutes, while the buffalo stood in the road, crossed the road, and even walked very close to our car. In that situation, I find myself feeling very nervous for the people who were brave enough, or maybe crazy enough, to take that drive on a motorcycle. They are truly at the mercy of the buffalo, should they decide that they don’t like the look of the motorcycle. They have been known to “attack” a car or pickup, and I’m sure even a motorcycle, but I can tell you that the motorcycle would not fare as well as a car or truck. Most of the time, if you stay with your vehicle, you are pretty safe, even if the buffalo are on the run.

It is the people, and there is always a few, who just have to walk out to the buffalo to get a closer look, who get in trouble. We have watched people take that chance with their little ones, and even grandma using a walker to get close. If the buffalo became agitated and charged them, they are defenseless. Most people aren’t trying to feed the buffalo, but a number of people who have been gored and even killed were trying to take a selfie with the buffalo. The buffalo is an animal you certainly don’t want to turn your back on, and that is how a selfie is done. While it’s not funny exactly, we found a t-shirt this year in the Black Hills that said, “Do Not Pet The Fluffy Cows.” We have also seen signs that say the same thing. That is exactly what buffalo look like…a fluffy cow. I suppose that is why people assume they are tame. 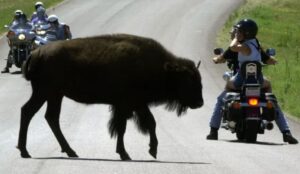 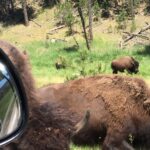 No one really knows what might set a buffalo off, and sometimes it’s nothing at all. Maybe the buffalo is in a bad mood that day. They have been known to attack people who were in the places they should be, and minding their own business, but most often, buffalo attacks are caused when the buffalo is startled, or when people just get too close. This year, so far there have been three buffalo incidents. That’s tragic!! Please people, keep your distance and stay in your car.