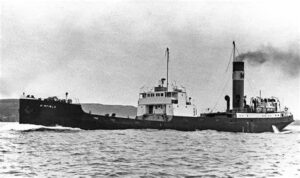 Shipwrecks have always intrigued me. Of course, you always hope that everyone got out alive, but the unfortunate truth is that usually that is not the case. Most shipwrecks sink to the bottom of the ocean, and often it takes years to even fins them. That was not the case with the SS Ayrfield, as well as a couple of other ships that “sank” in plain sight.

The SS Ayrfield was built in 1911, and it really didn’t sink. The plan was for it to be decommissioned and scrapped. The SS Ayrfield’s fate was sealed. She had served faithfully for 60 years, having been built in Scotland and sailed to Australia. She was used as a transport supply boat to US troops in the Pacific in World War II, and then retired. She was then used to run coal from Newcastle to Sydney for the rest of her working life. She was finally sent to Homebush Bay, which is where the old marine wrecking yards were. Ships didn’t come back from Homebush Bay. That feels a little sad to me. The plan was to scrap the ship, but that wasn’t exactly what happened. As the ships sat rusting, waiting for the final scrapping, somehow it just didn’t happen. As they sat there, their insides slowly became completely colonized by mangrove trees. Branches and bark replaced the railings and ropes. The trees have taken root and as they have grown, they have created a giant leafy dome over the slowly disappearing hull. The ships have become known as the “Floating Forest” for obvious reasons, and just like a forest, their beauty is amazing.

Homebush Bay is actually home to the remains of the SS Ayrfield, as well as her neighbors, SS Mortlake Bank, steam tugboat SS Heroic, and boom defense vessel HMAS Karangi, all of which were broken up in the early 1970s. It is thought that there may be as many as seven ships in the bay. They now lie near the south-western shore of the bay, and they are completely visible from land and the hundreds of homes just a short distance away. Some people consider the ship graveyard, a little creepy, but since these weren’t sinkings with a loss of life, I think they are very cool. 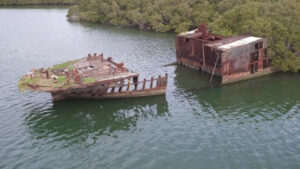 Unfortunately, during the 20th century, Homebush Bay was a heavy industry center, home to many industrial facilities. When industrial operations scaled down, the bay became a dumping ground for a large range of unwanted material…from waste to broken up ships, even toxic industrial waste. Union Carbide had manufactured chemicals, including Agent Orange, on the site and dioxins produced as a byproduct were buried in landfill or left in drums. The area has been in the process of being reclaimed, but fishing is prohibited, and I would not want to go in the water. It just doesn’t seem safe…even if it is beautiful.