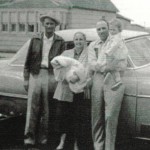 Growing up, I had only one set of grandparents. My dad’s parents were both in Heaven by the time I was six months old, so my grandparents were George and Harriet (Hattie) Byer. My grandpa was a tall man, but he was very slim. Still, I always thought of him as a big man…with big hands. I’m sure his slimness was due to several factors. In those days, everyone had large families, and my grandparents, with nine children, were no exception. That many kids during the Depression Years meant that food was a bit scarce, and my grandparents never turned away a hungry neighbor or any other hungry person, for that matter. My aunts and uncles can remember having strangers at the dinner table many times. Grandma would simply add a little more water to the soup to make things go a little further.

Grandpa Byer worked hard his whole life. He helped build Alcova Dam in Alcova, Wyoming. He was always considered a good worker and was always loyal and followed orders to the letter. Grandpa was always considered a dedicated employee. Grandpa was known to follow orders to the letter, and it actually saved his life one time while digging a ditch. When his boss walked by and saw the beginning of a cave in, he yelled, “Jump George!!” Grandpa immediately did as he was told, and his upper body was above ground after the cave in. Many people, these days, would have found themselves in a lot of trouble…even the ones who jokingly say they would ask, “How high.” There was no time to ask anything. Grandpa’s life depended on his immediate action…and I’m happy he followed those orders.

Grandpa was loved by all who knew him, and while his was a strong man, he was soft-spoken, and often quiet… 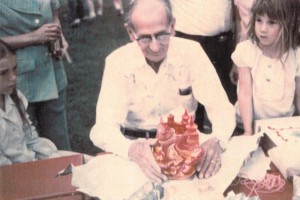 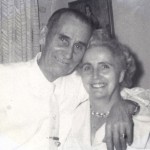 something that might also have come from the fact that he had a big family. It’s not easy to get a word in when you have that many people all wanting to talk at the same time. Nevertheless, if Grandpa needed to make his voice heard, I’m sure he could. He was a man who commanded respect…not because people feared him, but because they loved him. Today is the 129th anniversary of my grandfather’s birth. Happy birthday in Heaven, Grandpa. We love and miss you very much.

2 Responses to A Big Man