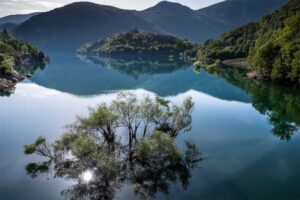 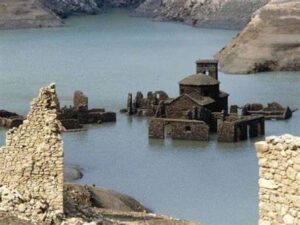 Whenever a man-made reservoir is created, there is a possibility that a town, ranch, or some other building will be covered up, in the process. That applies everywhere really, because often towns, ranches, and such are built near rivers, and to make a man-made reservoir, you need to dam up a river. Of course, there are natural ways to make a reservoir, but whatever you do, there must be a water source somewhere nearby.

While making man-made reservoir is fairly common these days, it really wasn’t in medieval Italy or any other medieval times, but still, it wasn’t unheard of. Lake Vagli in Tuscany is a man-made reservoir, and like many other man-made reservoirs, it is hiding a secret. Below the surface lies the village of Fabbriche di Careggine, a medieval village founded around the year 1270 by blacksmiths in the area. The village existed for hundreds of years as a small mining community. All that ended in 1946, when a hydroelectric dam was built, which forced the evacuation of the village. At the time, there were still 150 people living in Fabbriche di Careggine. They moved to the nearby town of Vagli Sotto.

For whatever reason, the lake was drained in 1958, presumably to work on the dam. Whether it was then that the interest in the village grew, or not, the lake was drained again in 1974, 1983, and 1994…again for dam maintenance. On the last occasion, the draining sparked the interest of about a million visitors, who came to see the ruins, which include homes, a bridge, cemetery, and church. Then, in 2021, the lake was drained again. I wonder if this time was as much for the tourism factor, as it was for dam maintenance. Getting people to come to an area, where they will logically, spend money, is a great motivator, and from an educational aspect, being able to walk around in, and explore a 751-year-old village is pure gold. For many people, that is a once-in-a-lifetime event, and they will do whatever it takes to take part in such an event.

While I can fully understand their interest, I would like to know just how it is that this village from the year 1270 could possibly have held up in the first place. I would think that the water, and whatever organisms live in 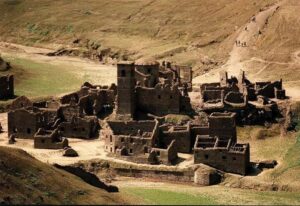 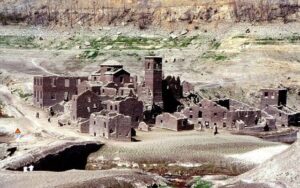 the lake, would have caused the deterioration of the buildings in the village. Nevertheless, they seem to be holding up remarkably well. Maybe the builders back then used superior materials, or maybe the water somehow actually preserved the stones better that the air would have. Either way, I think this would have been quite a sight to see.