A Rough And Tumble World 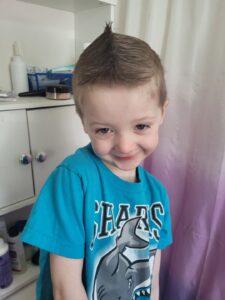 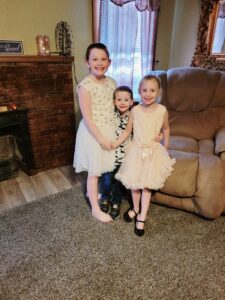 My great grandnephew, Jaxx Harman is such a sweet boy. He is the youngest child and only son of my grandnephew Jake Harman, and his wife Melanie. Having two older sisters doesn’t bother Jaxx one bit, because he is well able to hold his own against the girls, Alice and Izabelle…should he ever need to. Nevertheless, Jaxx and his sisters are really good friends too. They might pick on him some, but he picks right back, so it’s really no big deal. Their household is really a rough and tumble world. The kids enjoy the teasing and are all really good sports about it all. The really fun thing about having kids who love to tease and are fie with being teased is that the house is always filled with laughter.

For Jaxx, his daddy is his favorite and his best friend. Once Jake gets home from work, Jaxx is quite literally glued to him and just loves playing kingdom hearts with him. They spend lots of time doing things together, and if Jake is doing something, you can be sure that Jaxx is too, or will be just as soon as he is old enough to do so.

Jaxx is also very helpful to both his parents, and a very loving little boy. He just randomly gives hugs and kisses, and that just makes the day of the receiver. I love it when little boys don’t mind hugs for family members. Some boys are rather resistant to public displays of affection, so when you have one that loves hugging those he loves, it is a really special blessing in your life. Jaxx also loves to tell those he loves that he loves them. He instinctively knows that you really should let the people you love know that you love them. It makes their day, and that is important. Jaxx’s his true best friends are his mommy, daddy, and his two sisters.

Now, don’t assume that because Jaxx is very loving, and full of hugs and kisses, that he is in any way a wimp. 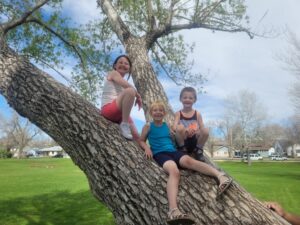 Jaxx is all boy, and he loves to wrestle and climb on everything from the furniture to any tree that he can get up in. I find it so hard to believe that Jaxx will be in Kindergarten in the Fall. Where have all the years gone? It seems like just yesterday that we were waiting for him to arrive, and now, he is growing up so much and so fast. I know that Jake and Melanie are both so proud of their son, like the rest of the family is too. Today is Jaxx 5th birthday!! Happy birthday Jaxx!! Have a great day!! We love you!!