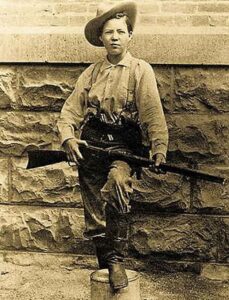 Pearl Hart was born Pearl Taylor in 1871, in the Canadian village of Lindsay, Ontario. Her parents were both religious and affluent, which allowed them to provide their daughter with the best available education. At the age of 16 and a bit of a rebel, she was enrolled in a boarding school where she fell in love with a young man named Hart, who has been variously described as “a rake, drunkard, and/or gambler.” That reputation didn’t deter Pearl and before long, the couple eloped, but Pearl soon discovered that her new husband was abusive and left him to return to her mother.

One would have thought that she would have learned her lesson and changed her ways before her future life of crime got started, but she chose to become an American Old West outlaw. Pearl Hart gained notoriety just before the turn of the 20th century as a female stagecoach robber. She cut her hair short, dressed in men’s clothing. She actually committed one of the last recorded stagecoach robberies in the United States, and her crime gained notoriety primarily because of her gender. To find out that a woman of that era was brave enough to pull off a stagecoach robbery was very unusual indeed.

Many details of Hart’s life are uncertain, with available reports being varied and often contradictory. It is thoughts that Hart reconciled with and left her husband several times. During their time together they had two children, a boy and a girl, whom Hart sent to her mother who was then living in Ohio. At least her children had a stable home. In 1893, the couple attended the Chicago World’s Fair, where he worked for a time as a midway barker. She in turn developed a fascination with the cowboy lifestyle while watching Buffalo Bill’s Wild West Show. At the end of the World’s Fair, Hart left her husband again on a train bound for Trinidad, Colorado, possibly in the company of a piano player named Dan Bandman.

By early 1898, Hart was in the town of Mammoth, Arizona. Some reports indicate she was working as a cook in a boardinghouse, while others indicate she was operating a tent brothel near the local mine. While doing well for a time, her financial outlook took a downturn after the mine closed. About this time Hart attested to receiving a message asking her to return home to her seriously ill mother. Looking to raise money, Hart and a friend known only as “Joe Boot” worked an old mining claim he owned, but they found no gold in the claim.

It was then that they decided to rob the stagecoach traveling between Globe and Florence, Arizona. On May 30, 1899, at a watering point near Cane Springs Canyon, about 30 miles southeast of Globe, they began their robbery run. Hart had cut her hair short and dressed in men’s clothing. Hart was armed with a .38 revolver while Boot had a Colt .45 revolver. The stagecoach run had not been robbed in several years, so the coach did not have a shotgun messenger. The pair stopped the coach and Boot held a gun on the robbery victims while Hart took $431.20, which would be about $13,500 today, and two firearms from the passengers. After returning $1 to each passenger, she then took the driver’s revolver. It was such an odd gesture. After the robbers made their getaway, the driver unhitched one of the horses, headed to town to alert the sheriff.

Accounts of the next few days vary. According to Hart, the pair took a circuitous route designed to lose anyone who followed while they made their future plans. Others claim the pair became lost and wandered in circles. Regardless, a posse led by Sheriff Truman of Pinal County caught up with the pair on June 5, 1899. Finding both of them asleep, Sheriff Truman reported that Boot surrendered quietly while Hart fought to avoid capture. Hart was eventually caught and after being found guilty, sentenced to five years in prison. She was pardoned

after three years. Some accounts have her returning to Tucson 25 years after her imprisonment to visit the jail cell that once held her. A census taker in 1940 claimed to have discovered Hart living in Arizona under a different name, as she had married again. Pearl Bywater was living a private life with her husband of 50 years, George Calvin “Cal” Bywater. She is acknowledged as the only known female stagecoach robber in Arizona’s history, earning her the nicknames of “Bandit Queen” or “Lady Bandit.”