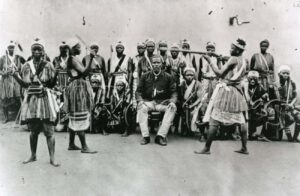 The Dahomey Amazons were given a number of different names, but the Mino, as they were called, were mostly an army recruited from among the king’s wives. They were a large group of 4,000 to 6,000 female warriors. Strangely, they made up about one third of the overall Dahomey military. King Houegbadja, who ruled from 1645 to 1685…the third King of Dahomey, is said to have originally started the group which would become the Amazons as a corps of elephant hunters called the gbeto. They were commonly known as Mino or “our mothers” and were the royal bodyguards of the kings of Dahomey, which is currently the Republic of Benin.

These women might have been the wives of the king, but that did not make

them wimps. Their training was intense and fierce. They learned survival skills and indifference to pain and death, storming acacia-thorn defenses in military exercises and executing prisoners. Discipline was emphasized. Once trained, the Mino were known to fight with incredible bravery and “audacity.” Due to the profits from the slave trade, they were also armed with Danish flintrocks and Winchester repeaters, which would come in handy when they took on the French army.

The kings recruited both men and women soldiers from foreign captives, though women soldiers were also recruited from free Dahomean women. Some of these “women” enrolled as young as 8 years old, if you can call an 8-year-old girl a woman. Some women in Fon society became soldiers voluntarily, while others were involuntarily enrolled, if their husbands or fathers complained to the king about their behavior. Imagine that…but then times were different. Apparently, membership among the Mino was supposed to teach them to use any aggressive character traits for the purpose of war. During their membership they were not allowed to have 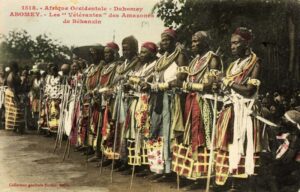 children or be part of married life, although many were legally married to the king. Serving in the Mino offered women the opportunity to “rise to positions of command and influence” in an environment structured for individual empowerment. The Mino were also wealthy and held high status. These women were true fighters and very determined. In a bold move, King Behanzin started a war with France in 1890. Despite being a formidable force, the French lost several major battles against the Mino early on. It just goes to show that women can be warriors too. These women were a long-standing force. The last known member of the Dahomey Amazons died in 1979.