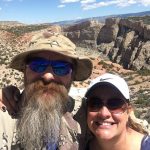 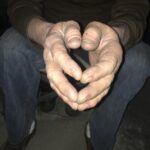 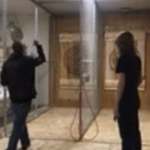 This has been an interesting year for my nephew, Steve Moore. Steve enjoys doing things with his hands, and on March 5, 2021, he managed to get twisted up in the lathe. It happened to be the same day his father-in-law, LJ Cook was having back surgery, and the day his uncle, Ron Schulenberg was visiting, so thankfully there was someone there to help. things could have turned out much worse for Steve, but he got out of it just in time before it did more damage. Steve had to go through occupational therapy to repair the torn muscles. His hand will take a while to get back to where it was, but he has his hand and the use of it, and that is a huge blessing.

Steve was still recovering, when his company held their “late” Christmas party (lots of late Christmas parties this past year). They had decided to go to a place in Cody (Steve lives in Powell, Wyoming) called Cody Firearms Experience. Apparently they couldn’t have picked a better place, because everyone thought this place was very cool. Cody Firearms Experience offers practice ranges for shooting any gun, and they would have had Steve at that point for sure, but you can throw axes/tomahawks!! They give lessons, if you need them. Steve and his wife, my niece, Machelle Moore went back a couple times and that’s all it took. Steve is hooked. Steve and Machelle love to go camping, and so tomahawk throwing has become a part of the camping experience. He has gotten really good by practicing at camp and in their back yard.

In a normal year, Steve can be found helping his father-in-law and anyone else who needs help, cutting firewood, or just about whatever else is needed, but right now, he can’t stand any vibration on his hand. He even has a hard time running the weed eater, but he does get that done in their yard. That said, he had to take the summer off from trying to help his father-in-law get firewood for the winter. LJ found a guy that brought him some wood for the winter. It was already cut and split, so that was nice. Steve plans to work hard this winter to get his had back in shape for next summer. He is hoping he will be confident enough next summer to run the chainsaw. The chainsaw takes strength and hand control, so time will tell.

In the meantime, Steve has picked up the new hobby of throwing knives and tomahawks. His boys, Weston and Easton Moore love it too. It has been something that is a lot of fun for Steve and the boys to “bond” over. Then his work supervisor had a buddy that supplied them with some wood to throw in. They made some really nice targets. Since Weston lives in Butte, Montana now, Easton has had more time throwing, because he still lives at home. Steve even got the neighbor into throwing tomahawks. Then the neighbor brought over old kitchen knives to try. That didn’t work too well. They all ended up breaking. I guess kitchen knives weren’t designed for throwing at a wooden target. Steve ordered the good knives, and now they have knives to throw that don’t break. They are made of muck heavier metal. The tomahawks they used are hand forged, hand made out of Ohio…which prompted me to suggest that Steve needs a forge of his own. Machelle likes the idea, so I expect to see that going on in the future.

Steve and his family have been hiking in the Big Horn Mountains for twenty years, and going part way up one hill most of that time. They just love the area. This summer they hiked up higher up the hill than they had ever gone before and came across a replica (similar anyway) to the famous “Medicine Wheel” that is up there. They really like the are, because of the dark red dirt. They were hiking a different route, and ended up going to the top on the back side. As they were headed back to the truck, they found this wheel. When they got out the

compass, they found that, sure enough, the lines are exact north, south, east and west. They felt like they had found a real gem. Steve and Machelle love being out in the mountains, so I wouldn’t be surprised if they find the other wheels they have heard are out there. Today is Steve’s birthday. Happy birthday Steve!! Have a great day!! We love you!!