The Temperament Of A Grizzly Bear 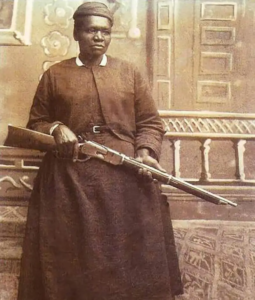 When we think of our mail carriers or even couriers, we generally think of someone who is mild mannered, and easy to get along with. Or some of us might think of someone who is lazy and slow, but we don’t often think of someone with “the temperament of a grizzly bear” and a quick hand on the draw. And if we do think of someone like that, we almost never think of it being a woman. Nevertheless, Stagecoach driver Mary Fields was one tough cookie, but it would be her devotion to her community that made her a legend across the Wild West.

Sitting aloft on a stagecoach pulled by a team of horses, Fields covered over 300 miles every week to deliver mail across the West. She was not a petite woman, but rather she stood six feet tall. Fields kept a revolver and a rifle on her person at all times, and even when she wasn’t on the road, she was still a tough lady. When she was off duty, this postwoman of the Wild West was usually seen at the saloon or smoking a cigar. Fields was the first black woman to ride for the US Postal Service, and she wasn’t just tough, but she was one of a kind. She wasn’t a typical girly girl of the Wild West, but she was very special. Fields was a woman of grit.

Fields was born a slave in 1832, and according to some biographers, her mother was a house slave and her father a field slave. When Fields was in her 30s, she became a free woman following the Civil War. Once she was freed, Fields left Tennessee, and headed for Mississippi where she worked as a maid on the steamboat Robert E Lee. She later took a job as a servant in the home of Judge Edmund Dunne in Ohio. While she worked for the judge, she was introduced to his sister, Mother Amadeus, who was the Mother Superior of the Ursuline Convent in Toledo. The Mother Superior brought Fields on to work at the convent as a groundskeeper, but that job didn’t go well. When one sister asked Fields about her journey to Toledo, Fields replied that she needed “a good cigar and a drink.” I’m sure that a woman wanting a cigar and a drink in a convent probably wasn’t your average situation. One of the other nuns complained, “God help anyone who walked on the lawn after Mary had cut it.” In addition, the fiery groundskeeper with a “difficult” nature even loudly complained about her pay.

Then, in 1885, Fields left Ohio behind to travel west to Saint Peter’s Convent in the wilds of Montana where Mother Amadeus had established a children’s boarding school. The Mother Superior had fallen ill with pneumonia. Her choice of a caregiver…Fields, so she personally called for Fields to serve the nuns and nurse her back to health. Fields decided to settle in at the new convent after Mother Amadeus’ recovery. At the convent, Fields was given a position for which she was far better suited…the convent’s wagon team, hauling supplies. In addition to hauling supplies, Fields transported visitors to and from the train station. She was very serious about her job, once guarding the supplies for an entire night, single-handedly fending off a wolf pack that had spooked the horses, causing the wagon to flip.

While Fields loves working with that nuns, things were not always smooth sailing. When she wasn’t assisting the nuns and students and seeing to the chickens and vegetables on the Ursuline Convent, Mary Fields could be found in the local saloons, getting into fistfights, and smoking cigars. She also trained with a revolver and rifle, earning a reputation as a crack shot. Her tough as nails temperament, would eventually be her undoing at the Convent. Fields got into a heated confrontation with a janitor at the convent. Because Fields and the Convent’s janitor had pulled guns on each other during the argument and Brondell had her removed from her position.

Mother Amadeus remained a strong ally to Fields, and so encouraged Fields to move to nearby Cascade, Montana, where she was the only black resident. At first, the nuns helped her start a restaurant, but it failed. In 1895, Mother Mary Amadeus helped Fields to apply for another job as a mail carrier for the US Postal Service. Now in her 60s, Mary Fields secured the position when she hitched a team of six horses to a postal

coach faster than any other applicant. She then began her daily, 17-mile trek from Cascade to Saint Peter’s. She was the second woman in US history to ride a mail route. She earned the nickname Stagecoach Mary while working as a star route carrier, protecting the mail from bandits. Fields rode her stagecoach to the train station to pick up mail and then delivered it on several routes, some of which were more than 40 miles. Fields drove over 300 miles each week to deliver the mail. When winter snow blocked the roads, an undaunted Fields threw a mail sack on her shoulder and walked over 30 miles wearing snowshoes. The people of Montana applauded Mary Fields for her commitment…and for her kindness.