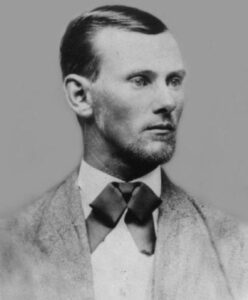 Some of the old west outlaw gangs were so bold that they would rob banks and such in broad daylight without even giving any thought about getting caught. They believed themselves to be invincible. One such gang, was the James-Younger gang. Many of the people in the towns in Minnesota were afraid of the James-Younger gang and rightfully so, but on September 7, 1876, the people of Northfield, Minnesota had had enough!! That morning, the James-Younger gang decided to make a bold daytime robbery of the Northfield Minnesota bank. Much to their surprise, the gang suddenly found itself surrounded by angry townspeople. The gang was nearly wiped out that day.

The gang started the robbery with a diversion. Five men galloped through the center of town, yelling and shooting their pistols in the air. In the old west, you might see such a display when cowboys got drunk. The men who worked on the cattle ranches would come to town, looking for a good time. Sometimes, things got out of hand, and the partying cowboys would ride through the streets whooping and hollering in a celebratory way…until the sheriff got tired of it anyway. However, this was different, because this was not after a hard day’s work, it was in broad daylight.

At first, the townspeople ran for cover from the five men, while three other men wearing wide-brimmed hats and long dusters took advantage of the distraction to walk unnoticed into the First National Bank. They pulled pistols on the bank cashier and ordered him to open the bank safe. The cashier recognized Jesse James, nevertheless, he stalled, claiming that the safe had a time lock and could not be opened. Somewhat thrown, Jesse James considered his next move, and the cashier took advantage of the moment. In a sudden move, he made a break for the back door. One of the robbers fired twice, hitting the cashier in the shoulder. Nevertheless, the man managed to stumble to safety and sound the alarm.

The citizens of Northfield were done being afraid. They ran to surround the bank and in their rage, they mercilessly shot down the robbers as they tried to escape. A 19-year-old medical student killed one gang member, Clell Miller, while the owner of the Northfield hardware store mortally wounded Bill Chadwell, peppering his body with bullets from a rapid-firing Remington repeater rifle. Jesse’s brother, Frank, was hit in the leg, while their criminal partners…Jim, Cole, and Bob Younger…were also badly wounded.

Jesse was the last one to leave the bank, stopping for a moment to shoot the uncooperative cashier in the head. Then he jumped onto his horse and joined the rest of the survivors as they desperately fled town. Jesse and his brother Frank decided to go their own way after the botched robbery, so they escaped to Dakota Territory. For them, it was a good decision, because the rest of the gang was pursued relentlessly for the next two weeks by a very determined posse. Eventually the posse killed or captured four more of the gang 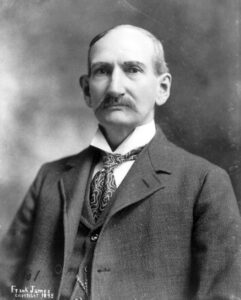 members. After things cooled down, Frank and Jesse James went to Nashville, Tennessee, where they started rebuilding their gang and planning new robberies. On April 3, 1882, a man named Robert Ford drew his weapon and shot the unarmed Jesse James in the back of the head. James’s original grave was on his family property, but he was later moved to a cemetery in Kearney. The original footstone is still there, although the family has replaced the headstone. James’s mother Zerelda Samuel wrote the following epitaph for him: “In Loving Memory of my Beloved Son, Murdered by a Traitor and Coward Whose Name is not Worthy to Appear Here.” James’s widow Zerelda Mimms James died alone and in poverty. Jesse’s older brother, Frank eventually ended his criminal activities. In his final years, he returned to the James Farm, giving tours for the sum of 25 cents. He died there at age 72 on February 18, 1915. He left behind his wife Annie Ralston James and one son. He is interred in Hill Park Cemetery, in the western portion of Independence, Missouri.