Flying Off The Handle 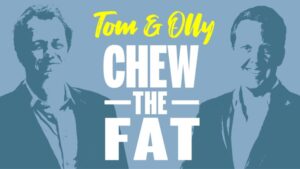 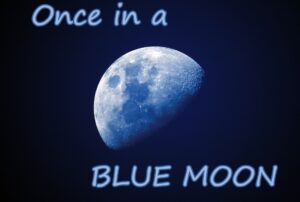 came from a totally different era and had a totally different meaning. For example, when we talk about sitting down with someone to have a long talk, we might say, we are going to “chew the fat” with them. This was originally a sailor’s term, that refers to the days before refrigeration when ships carried food that wouldn’t spoil. One such food was salted pork skin, which was largely fat. Sailors would only eat it if all other food was gone, and they often complained while they ate it. This idle chatter became known as “chewing the fat.”

The “blue moon” is one of my favorite and often used sayings, and it is a real astronomical phenomenon. The “blue moon” is the second full moon in the same month. It’s a rare occurrence, happening just once every 2.7 years, which is how the phrase came to be. Usually, a blue moon just looks gray or white like any other full moon, but on even rarer occasions, the moon actually does seem to change color. During volcanic eruptions or forest fires, the oils in smoke can make the moon appear blue, according to NASA.

We have all walked by the carnival games and maybe even played them. Carnival games nowadays give out stuffed animals as prizes, but in the late 19th century, the games were targeted to adults, not kids. The winners, instead of getting a giant teddy bear, might get a cigar. If they almost won but didn’t earn that prize, they’d be “close, but no cigar.” The phrase stuck as meaning getting close, but in the end, failing to reach the goal. By the 1930s, the phrase became fairly common…even outside of the fairgrounds.

We have all heard the expression “flying off the handle,” but most of us think it is an expression for getting angry. That is true, but it’s not really where the saying originated. The saying “fly off the handle” originates from the 1800s. It’s a saying that refers to axe-heads flying off their handles when swung backward before a chop. The axe-heads were not as securely fastened in those days, so it was a good idea to give the user some space…much like you do when someone gets very angry, and “flies off the handle” is the sense of how the phrase is used today. And, anyone who was on the receiving end of the anger form of “flying off the handle”

knew that they probably needed to duck and cover, because the person who was “flying off the handle” was really mad!! The next time you find yourself saying these, or any number of “old sayings” you might want to think about how that “old saying” really came into being. Some are funny, while others might just make you want to “fly off the handle.”