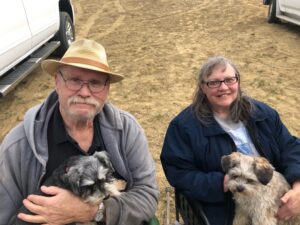 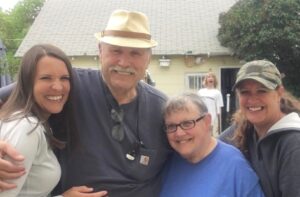 As I was thinking about my brother-in-law, LJ Cook’s birthday, I decided to talk to his daughters Machelle Moore and Susan Griffith about the special memories they had of their dad. Susan started thinking back on all the experience her dad had gained while he was in his working years, and how that made him the person he is today. She thought, and I agree that those things are LJ had been a Deputy Sheriff and later a truck driver, but he really always wanted to live in a small town. I think he liked knowing many of the people he lives around. So, he and his wife, my sister-in-law, Debbie moved their family to Thermopolis, Wyoming. They loved living in Thermopolis, and my girls, Corrie Petersen and Amy Royce loved going up there to stay for a week in the summers to hang out with their cousins. Then LJ got an offer he couldn’t refuse, and the family moved to Powell, Wyoming where he began managing Empire Gas. That move would change the life paths of the whole family. Susan tells me, “Dad was the manager of the store, and was put in charge of all the propane tanks in the Big Horn Basin, which is a big area. It was his job to go to each tank and refill them. It was the late 1980s, so there were more people then using propane than there are now. They needed the propane to cook, and some to heat their houses with. He tells me about some of the places he got to go to switch out the tanks. He met a huge array of people and got to see a lot of cool places that the average person doesn’t get to see, since all of the tanks were on private land. Listening to him talk about the job made it sound like the most ideal job.” I think for LJ, it really was.

LJ has always been a jokester. He told Susan about this one day at work. There was a bee (or some kind of bug) on the window sill of his office while he was working at Empire Gas. He said he somehow cut the head off the bee (Susan thinks he said with his pocket knife). Well, it kept flying around without it’s head. Every time it hit something it world sting it. Susan says, “He said he told his secretary what happened and she took off out 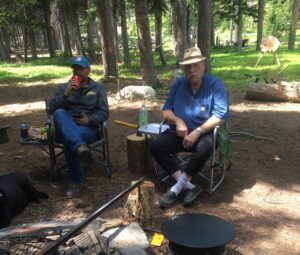 the front door. Which is exactly what I would have done if there was an AWOL bee flying around. He laughs so hard when he tells the story. It must have been pretty funny to see her take off out of there so quickly.” And speaking of bees and LJ, apparently they really don’t bother him a bit. LJ’s daughter, Machelle tells me that he has been helping his best friend, Bill with his bees!! LJ does cover up a little, but doesn’t mind getting stung. Bill has a truck load of bees he goes and gets every year in California. LJ goes around to different places where Bill has the bees to collect the honey for him. I guess he wouldn’t have run out of a room with a bee in it.

Recently, LJ had to have back surgery. He was in so much pain, he could barely walk…with a walker. Following his back surgery, LJ Cook had to take things rather slowly for a while. He and Debbie normally spend much of the summer in the Big Horn Mountains camping, but this year was turning out to be vastly different. As he has recovered, he has been able to start swimming, and hopefully that will help with recovery and mobility. He has really missed out on things since his back really got bad. His daughter, Machelle told me that they did manage to get up to the Big Horns over the 4th of July to spend time with the family, and they really enjoyed it.

Machelle told me that LJ has several extra vehicles, and so decided to sell a couple of them. It was his grandson, Easton, who decided to buy the Bronco. Machelle remembers that when they first got the Bronco, she was never allowed to drive it. So, now that her son is going to be the owner, and not her dad…will Machelle be allowed to drive it? Time will tell, I guess. With this family of jokesters, my guess will be…not for a while, hahahaha!!!

Susan tells me that while she was growing up, if she was in a bad mood he would always find a way to make her smile and feel better. You could say he is the best girl-dad Susan could ask for. Even though he used to embarrass her terribly sometimes. Susan reflected, “A few weeks ago, I came down with a bad bug that gave me a low grade fever and it made me think of when I was super little, I would go sit on my dad’s lap and just 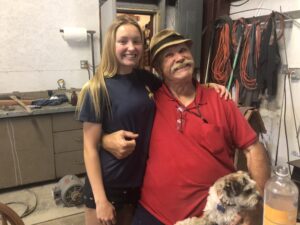 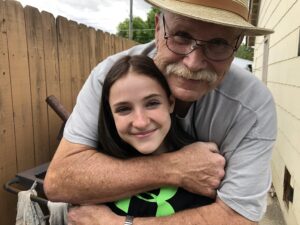 sitting there made me feel a little better. When I was sick, I was wishing I could go sit on my dad’s lap. Well that definitely can’t happen anymore because I would then get him sick and the world seems to be a different place with regard to sicknesses right now. I know I can still go sit on his lap, but it’s just not the same as an adult.” No, I don’t suppose it would be. Today is LJ’s birthday. Happy birthday LJ!! Have a great day!! We love you!!