A Choice Of The Heart 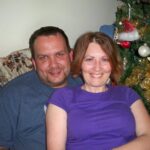 There have been much speculation over the years as to why we marry the person we do. Does our taste in a mate come from…say our parents, friends, or some random part of our own brain. Or, is their simply no rhyme or reason as to how we choose that person we will spend the rest of our life with. When I look at couples, there are some who seem perfectly suited to each other, and then there are those who seem to be total misfits, and yet they are totally happy with each other. Of course, one never knows how long they have been married, whether they will stay married, or if they are on their second or third marriage (indicating a poor choice in the first or second marriage). Oddly, when they do divorce in the first marriage, it amazes me sometimes, just how similar their second choice in mate is to their first…sometimes anyway.

It has been said that a girl chooses a man who is similar to her dad, and I can see that in my own choice. Bob reminds me a lot of my dad, but while they all look different, my brothers-in-law also remind me a lot of my dad. I think that a girl might choose a man who is a lot like her dad, if her dad is a wonderful dad, like my dad was. My sisters would agree. It is further thought that a man chooses a woman who is much like his mom. That makes sense, because he would want someone who can take care of him, his home, and his kids the way his mom took care of the home and family when he was a kid. Of course, there are those who don’t know their parents for one reason or another. They might base their choice on a step-parent or other mentor, I suppose.

Of course, no one really makes that choice consciously. It it always a choice of the heart, but oten the heart knows what it knows from the parental upbringing.

I don’t believe that our life partner choice is a random thing, because while I dated a number of nice men, they were all quite different from my dad, and from my husband…and the fact is that I could not imagine myself marrying any of them. They were never going to be the type of man I could spend the rest of my life with. Nice as they were, they would never have been the one for me. I tend to think that somehow God leads the one, the real one into your life, and if you have your eyes open, you will find that perfect one for you.