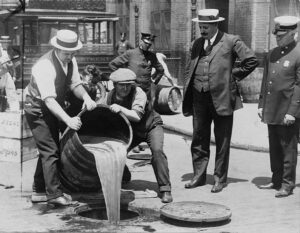 As many of us know, from history, there was a time in United States history when alcohol was illegal. Some will debate if it should still be today, but it is not. Prohibition, as it was called, ran from 1920 to 1933. Prohibition in the United States was a nationwide constitutional ban on the production, importation, transportation, and sale of alcoholic beverages. The Prohibitionists were led by pietistic Protestants. The idea was to heal what they saw as an ill society beset by alcohol-related problems such as alcoholism, family violence and saloon-based political corruption. There are many alcohol related issues that really do fall into these categories, but you can’t make people stop something that they are intent on doing. Drugs are the same, but we have to draw the line somewhere, or we will have a “zombieistic” society.

As Prohibition progressed, many communities introduced alcohol bans and enforcement of these new prohibition laws became a topic of debate. Prohibition supporters were called “Drys.” The “Drys” presented prohibition as a battle for public morals and health. The progressives, along with the Democratic and Republican parties picked up on the movement, and it gained a national grassroots base through the Woman’s Christian Temperance Union. After 1900, it was coordinated by the Anti-Saloon League. There were those who opposed Prohibition, including the beer industry, who mobilized “Wet” supporters from the wealthy Catholic and German Lutheran communities, but the influence of these groups receded from 1917 following the entry of the United States into the First World War against Germany.

By a succession of state legislatures, the alcohol industry was curtailed, and finally ended nationwide under the Eighteenth Amendment to the United States Constitution in 1920. The Eighteenth Amendment passed “with a 68 percent supermajority in the House of Representatives and 76 percent support in the Senate,” as well as ratification by 46 out of the 48 states we had at the time. That enabled legislation, known as the Volstead Act, which set down the rules for enforcing the federal ban and defined the types of alcoholic beverages that were prohibited. Unlike most people think, not all alcohol was banned. For example, religious use of wine was permitted. Private ownership and consumption of alcohol were not made illegal under federal law, but local laws were stricter in many areas, with some states banning possession outright.

With prohibition came the criminal element associated with a refusal to comply. Criminal gangs gained control of the beer and liquor supply in many cities. By the late 1920s, a new opposition to Prohibition emerged nationwide. Critics attacked the policy saying it was actually causing more crime, lowering local revenues, and imposing “rural” Protestant religious values on “urban” America. In another bizarre twist of Prohibition in the United States, the United States government literally decided that if people would not comply with the new law, they would make the penalty much stiffer. When the people continued to consume alcohol despite its being banned, law officials got frustrated and decided to try a different kind of deterrent…death. They literally ordered the poisoning of industrial alcohols manufactured in the United States. These were products regularly stolen by bootleggers to use is making moonshine. By the end of Prohibition in 1933, the federal poisoning program is estimated to have killed at least 10,000 people.

Prohibition ended with the ratification of the Twenty-first Amendment, which repealed the Eighteenth 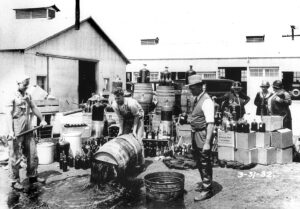 Amendment on December 5, 1933, though prohibition continued in some states. To date, this is the only time in American history in which a constitutional amendment was passed for the purpose of repealing another. Looking back on Prohibition, you will find researchers who say that alcohol consumption declined substantially due to Prohibition. They will also say that rates of liver cirrhosis, alcoholic psychosis, and infant mortality declined as well. Prohibition’s effect on rates of crime and violence is rather another story, because of the criminal element that made and sold alcohol in spite of the law. Nevertheless, Prohibition lost supporters every year it was in action, and lowered government tax revenues at a critical time before and during the Great Depression. I guys it all comes down to money in the end.