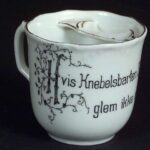 Through the years, there have been items used that we would not use today, and in fact, we might actually laugh at them. One such item is the “mustache cup.” The mustache cup made it’s debut in the Victorian era. During that time, the men with mustaches didn’t want their mustache being dipped into their tea, so the cups were made with a bow-shaped guard to keep the mustache out of the tea.

For those of us without a mustache and those of this era, the possibility of dipping the mustache into the tea was given little, if any thought…even for those with mustaches. “The moustache cup (or mustache cup) is a drinking cup with a semicircular ledge inside. The ledge has a half moon-shaped opening to allow the passage of liquids and serves as a guard to keep moustaches dry. It is generally acknowledged to have been invented in the 1860s by British potter Harvey Adams (born 1835).” The new invention spread all over the European continent and soon, every famous potter was making the new cups. A multiplicity of mustache cups were made by famous manufactories such as Meissen, Royal Crown Derby, Imari, Royal Bayreuth, Limoges, and others. Each potter created his own version of this masculine tableware and the news of that invention soon spread to America.

The Victorian era was a time when the mustaches flourished. In fact, from 1860 to 1916, the British military actually required all of its soldiers to sport a mustache for the authority it imparted to the man with the mustache. Special care was given to the mustache, including mustache wax, which was applied to the moustache to keep it stiff, with every hair in place. When drinking hot liquids, steam from the drink would melt the wax, which would drip into the cup. Sipping hot tea or coffee would also often stain mustaches. Knowing that makes the usage of the mustache cup a little more sensible, and not just some weird passing fad.

Many mustache cups were made in America over the years, with the earliest marked with names which led buyers to believe they were actually manufactured in England. English-made ceramics were very popular…not 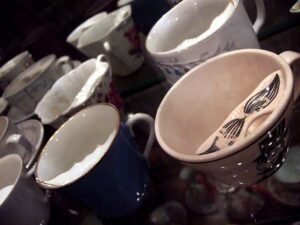 so much American-made ceramics. So, with the exception of the quadruple silver plate mustache cups made in the United States, it is extremely difficult to find an authentic Victorian mustache cup bearing an American pottery mark these days.

The mustache cup began to go out of style between 1920 and 1930, and so mustache cup production trickled to a halt. Today, with the collectors of all things antique, these examples of Victorian male elegance are coveted by a growing number of enthusiasts. There are also still those who use mustache wax, and it would seem that the mustache cup is still an item of necessity for these men.