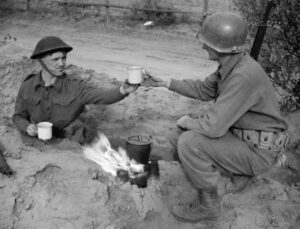 When you think of an army tank, the last thing on your mind is a way to make tea, but that became foremost in the minds of the designers of the British tanks. The Brits are well known for drinking their tea, and during World War II, that became a big problem. Apparently the enemy knew about this time-honored tradition, and took advantage of the soldiers who participated in it. During the war years, tea can be documented as being to blame for the loss of approximately 30 British tanks. The men had to exit the tank to brew their tea, and the tanks were then wide open for attack. Something had to be done.

During World War II there was not time to get this all worked out, but in 1945, all British tanks were equipped with tea-making facilities. The British high command realized that if tank crews could make their tea on the go, then they wouldn’t be susceptible to being “caught with their pants down and their kettles out” by the enemy. So, since the British Centurion MBT (main battle tank) was introduced in late 1945, all British tanks and most AFVs (armored fighting vehicles) have been equipped with tea making facilities. The official name of the unit was Vessel Boiling Electric, but it is usually abbreviated to Boiling Vessel (BV). Unofficially, it was known as a kettle or bivvie. The BV is a square, watertight container which holds one gallon of water. The BV device draws power from the vehicle’s electricity supply and permits the crew not only to make tea, but also boil water or cook food…making their time on the battlefield much safer.

Of course, the BV unit had other important uses too, such as allowing the vehicle’s crew to produce hot water 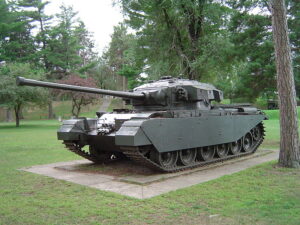 for washing or drinking purposes and simultaneously heat up canned food. The best part is that all of this can be done inside the vehicle itself, so the crew remains protected from enemy fire. That also protected them if there was danger of radioactive fallout or chemical weapons, which were considered a very real threat during the Cold War. It is now an official requirement for British AFVs to have a BV installed. This requirement is unique to the armed forces of the United Kingdom, and if you ask a British tank crew member what the most important part of the tank, they will tell you that it is the Vessel Boiling Electric, or the BV. Not only does it allow them to make their tea, but it keeps them safe when they are having a meal or drinking that tea.

One Response to A Fifteen-Minute Tea Break