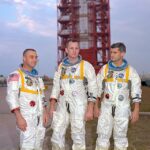 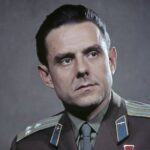 The race to space was not without the unfortunate casualties here and there. Nevertheless, as a whole, it has been a very safe program. The first deaths experienced by the United States, in the NASA program were those of Command Pilot Gus Grissom, Senior Pilot Ed White, and Pilot Roger Chaffee on January 27, 1967, when he Command Module interior caught fire and burned, during a pre-launch test on Launch Pad 34 at Cape Kennedy. At that time there was no interior latch, so the men could not escape the burning module. It was a terrible tragedy for the NASA program and the nation as a whole. The United States had been involved in a “race to space” with the Soviet Union, and the fire was a terrible setback…not to mention the horrific loss of life.

Things in the Soviet Union were different than in the United States, and Komarov’s wife had not been told of the Soyuz I launch until after Komarov was already in orbit. Sadly, she did not get to say goodbye to her husband. Komarov was considered a national hero, and there was vast public mourning in Moscow. Komarov’s

ashes were buried in the wall of the Kremlin. Space flight is dangerous, a fact that is well known to all who venture into its corridors. Despite the dangers, both the Soviet Union and the United States continued their space exploration. The United States landed men on the moon just two years later. Everyone was determined to see the program through, as they continue to be to this day.

One Response to Parachute Malfunction