Sinking Of The William P Frye 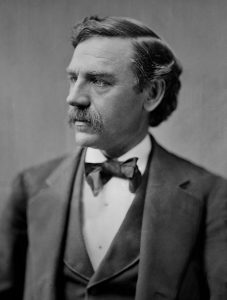 As is common with ships, the William P. Frye was a four-masted steel barque named after a US Republican politician of the same name, from the state of Maine. The ship was built by Arthur Sewall and Co of Bath, Maine in 1901. For a time, the ship had a great run…until 1915, that is. The ship sailed from Seattle, Washington on November 4, 1914, with a cargo of 189,950 US bushels of wheat. The ship and its cargo were bound for Queenstown, Falmouth, or Plymouth in the United Kingdom. In 1915 the United Kingdom was at war with Imperial Germany, but the United States was not enter the war yet and was officially neutral. It was early in the war, but that doesn’t make it any less dangerous to sail the high seas.

When the ship was near the coast of Brazil, the Imperial German Navy raider SMS Prinz Eitel Friedrich overtook the William P. Frye on January 27, 1915. The Germans stopped and boarded the ship. I can’t imagine what it must have been like to have an enemy navy detain a ship I was on. You just never know what they are going to do. The William P. Frye was owned by the United States, and so a neutral ship. The ship should have been treated 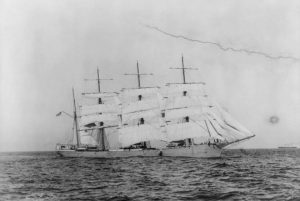 as neutral. The problem the William P. Frye had is that the cargo was deemed a legitimate war target because the Germans believed it was bound for Britain’s armed forces. In reality, even detaining the ship was probably an act of war, but that never seemed to bother the Germans anyway.

Upon making his decision that the William P. Frye was a legitimate target, the captain of SMS Prinz Eitel Friedrich, Max Thierichens, ordered that William P. Frye’s cargo of wheat be thrown overboard. The captain and crew began to comply, most likely begrudgingly, and when the orders were not followed fast enough, he took the ship’s crew and passengers prisoner. Then he ordered the ship scuttled on January 28, 1915. The William P. Frye was the first American vessel sunk during World War I, and the United States wasn’t even in the war yet. The 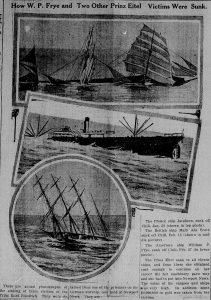 owners of the ship, Arthur Sewall and Co, wanted damages for the sinking of the ship and presented a claim for $228,059.54, which would total $5,763,800 today. In all, the SMS Prinz Eitel Friedrich scuttled eleven ships during their reign of terror. They stole coal and gold from their victims, which kept them going for a while, until they developed engine trouble.

In another act of war, Thierichens took the passengers and the crew captive. Women and children, were part of approximately 350 people taken prisoner from eleven different ships that SMS Prinz Eitel Friedrich’s crew had searched and destroyed. I suppose the possible act of war was somewhat forgiven when all 350 were released on March 10, 1915, when the German raider had engine trouble, and docked Newport News, Virginia, but then again, what else could they do with them. Nevertheless, an outraged American government forced the Germans to apologize for the sinking, and of course, the SMS Prinz Eitel Friedrich was detained in port.

One Response to Sinking Of The William P Frye