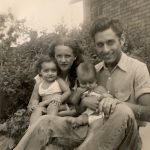 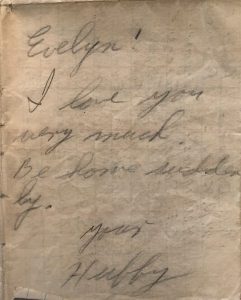 My uncle, George Hushman was “gone” on my aunt, Evelyn Byer from the moment he met her. You can’t blame him, because she was a beautiful woman. Once they were together, not much else mattered. They would have been as happy living in a shack in the slums, as they would have living in a palace. In reality, they lived in a beautiful, modest home, that they built themselves…or at least helped build. I’m sure that a contractor was involved too. I remember that house well. Uncle George would have given Aunt Evelyn the moon if he could have. Like many young couples, there were love notes. I happen to see on as I was helping to scan the family pictures. It was not long, but it was very sweet. Uncle George wrote, “Dear Evelyn, I love you very much. Be home suddenly. Love, Your Hubby.” It was a simple gesture, but the “suddenly” part is what caught my attention. It implied that he would really hurry home, and he couldn’t wait to see her. That was the kind of love they had.

My sisters and I spent many fun filled days there hanging out with the Hushman kids, Susie, George, Shelley, Shannon, and Greg. Aunt Evelyn and our mom, Collene (Byer) Spencer, were very close, so naturally, the two families spent lots of time together. Aunt Evelyn and Uncle George were fun-loving people. They had so much in common with my parents, and they were as much friends as relatives. For many years they were on a bowling league together, went on date nights together, and spent lots of time at each others house. There is a lot to be said for good friends, and when that good friend is also family, there is a surety that the friendship will last a lifetime…and so it did.

As the years went by, the foursome grew older, and even though they still loved each other very much, they couldn’t get together as much as they used to. It was a disappointment for all of them. Before long they were 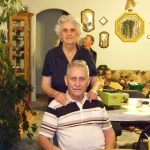 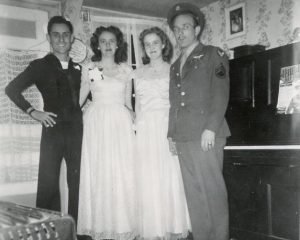 going home to Heaven…one by one. That is what made all of us the most sad. Uncle George was the last one to go home, and we were very sorry to see him go, because it was truly the end of an era. The foursome was gone now, and there would be no more of their dates, bowling, or their antics…which we all saw from time to time. It was really a sad time. Today would have been Uncle George’s 94th birthday. Happy birthday in Heaven, Uncle George. We love and miss you very much.