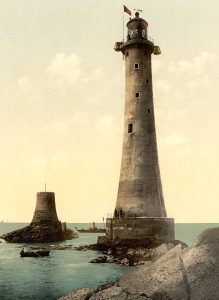 These days, we have advance warnings about potentially dangerous storms heading our way. Of course, the meteorologists aren’t always right on with their predictions, but often they are incredibly accurate. In centuries gone by, it was often the elder men, the ones who had been around a while, who had watched the sky, to see the signs that would give them clues as to coming weather. Unfortunately, on November 14, 1703, any clues they might have seen would not do any good for the people of England. The unusual weather began that day with strong winds from the Atlantic Ocean that battered the southern part of Britain and Wales. The pounding winds damaged many homes and other buildings, but the hurricane-like storm only began doing serious damage on November 26. Then the winds estimated at over 80 miles per hour, blew bricks from some buildings and embedded them in others. Wood beams, separated from buildings, flew through the air and killed hundreds across the south of the country. Towns such as Plymouth, Hull, Cowes, Portsmouth, and Bristol were devastated.

Finally, on November 27, 1703, the storm system finally dissipated over England. For almost two weeks, it had ripped the country nearly to shreds. With its hurricane force winds, the storm killed somewhere between 10,000 and 30,000 people. Hundreds of Royal Navy ships were lost to the storm, the worst in Britain’s history. It was the loss of the 300 Royal Navy ships that really caused the death toll to rise. The ships that were anchored carried some 8,000 sailors. All were lost. Then, the Eddystone Lighthouse, which had been built on a 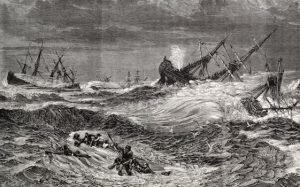 rock outcropping 14 miles from Plymouth, was blown over by the storm. All of its residents, including its designer, Henry Winstanley, were killed. Huge waves on the Thames River sent water six feet higher than ever before recorded near London. More than 5,000 homes along the river were destroyed.

The author Daniel Defoe, witnessed the storm, and it had such an impact on him that he wrote his first book, entitled “The Storm” the following year. In “The Storm” he described the storm as an “Army of Terror in its furious March.” Sometimes the best inspiration for writing a book is the events of real life. Defoe would later go on to write the well known novel “Robinson Crusoe.”

One Response to Events Of Real Life