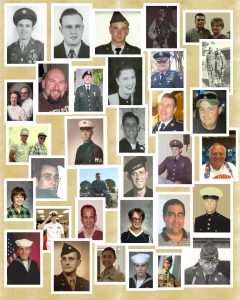 The United States is a great nation, but it would be very hard for a nation to remain great, if that nation did not have a strong military. These days, national security is not guaranteed. That makes our military men and women absolutely essential. All too often, I don’t think we give our veterans the respect and recognition they deserve.

Veterans and soldiers are unique characters. Most of us are not interested in running off to some other country at the drop of a hat to defend people we don’t even know. Nevertheless, when a people are being oppressed, it is a soldier who is called to defend them. These soldiers leave their homes and families, often for months at a time, and go off to another country to defend strangers. They miss births, first steps, school plays, graduations, and so much more. They miss tucking their children in at night, 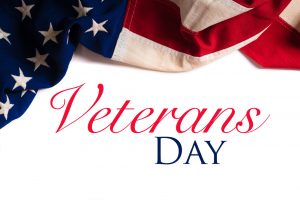 dropping them off at school in the morning, watching their sporting events, and having weekend barbecues, just to name a few. By the time they have left the military, their children are often mostly grown up. It is time they can never get back, and yet they consider it time well spent, because they did their duty and they saved lives. What more could we ask of them? 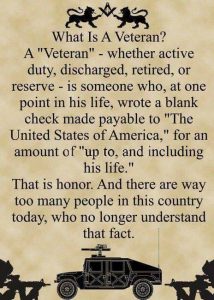 Veterans Day is a day when we honor those who served and upon their discharge, came back home. In this case, while it does honor veterans who have gone to their Heavenly home, it is not about those killed in action. Theirs is a different day…Memorial Day, the day we remember those lost in battle. All of these men and women served their country and the world, but a veteran came home and lived out their life…hopefully with all their limbs attached, but many times that was not to be either. Those veterans, and those with PTSD need our help badly, but all veterans, no matter what the outcome of their service was, deserve our complete and total respect. Veterans Day began on November 11, 1919, making this year the 101st anniversary of that date. To all those among us who served, thank you for your service, and to those veterans who have gone home, including my dad, Allen Spencer and many family members, I thank you!! Happy Veterans Day.