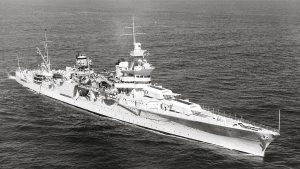 The USS Indianapolis (CL/CA-35) was a Portland-class heavy cruiser of the United States Navy, named for the city of Indianapolis, Indiana. The ship was launched in 1931, the vessel served as the flagship for the commander of Scouting Force 1 for eight years, then as flagship for Admiral Raymond Spruance in 1943 and 1944 while he commanded the Fifth Fleet in battles across the Central Pacific during World War II. Those were tumultuous times, and sometimes things “fell through the cracks,” but what happened to the USS Indianapolis was seriously unthinkable.

In July 1945, after the Indianapolis completed a top-secret high-speed trip to deliver parts of Little Boy, the first nuclear weapon ever used in combat, to the United States Army Air Force Base on the island of Tinian, they subsequently departed for Guam and then it was on to the Philippines on training duty. Little Boy was the bomb that was going to effectively end the war, but the war was not over yet, and it was imperative that everyone be on high alert. The waters in many areas of the world were filled with hidden dangers…namely, German U-Boats and Imperial Japanese Navy Submarines. Many a ship was sunk by these hidden enemies.

At 12:05am on July 30, 1945, the USS Indianapolis was torpedoed by the Imperial Japanese Navy submarine I-58, while en route to the Philippines. The mighty ship sank in just 12 minutes. There were 1,195 crewmen aboard, and approximately 300 went down with the ship, unable to get to the deck in time. The remaining 890 men were faced with exposure, dehydration, saltwater poisoning, and shark attacks while stranded in the open ocean with few lifeboats and almost no food or water. The scene was horrible. The men in the water could not necessarily see the sharks, but the screams of their fellow crewmen were unmistakable. And if the crew wasn’t dying by shark attack, they were slowly dying at the hands of the elements. Dehydration caused many to drink the saltwater that was in abundance around them, but soon it poisoned them, and instead of saving them, it killed them.

Because of the speed with which USS Indianapolis sank, there was no time to send a distress signal or even 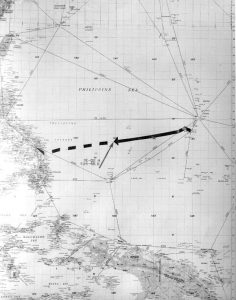 deploy all of the lifeboats and equipment. The men knew they would need to survive until their ship was overdue and reported missing. They didn’t know how long it would take, and this is where the Navy failed these men. Navy directive 10CL45, which meant no reporting of combatant ships that failed to arrive. No search until by accident someone saw an oil slick. When Indianapolis was overdue, the people who would have reported it as overdue, simply assumed that Indianapolis might have been redeployed to another training area, since that was part of their mission. According to the directive, no search crews were sent out. These men were unthinkably alone in the vast sea…and no help was coming. In fact, the Navy only learned of the sinking four days later, when survivors were spotted by the crew of a PV-1 Ventura on routine patrol. By the time the rescue began, only 316 of the 890 men who survived the original sinking were still alive. The sinking of Indianapolis and Navy directive 10CL45 resulted in the greatest single loss of life at sea from a single ship in the history of the US Navy.

One Response to Unthinkably Alone