Time Flies, When You’re Having Fun 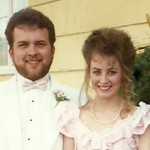 Twenty seven years…it can seem like a lifetime, or as is the case with my daughter, Corrie Petersen, and her husband, Kevin, it can fly by so quickly that it seems impossible that it has been that many years already. Corrie and Kevin began dating when she was just 15 and he was 19. They fell in love almost instantly, and they have never looked back. They married two weeks after Corrie turned 18.

So many things have changed over the course of 27 years. Two sons were born into their union, Christopher and Joshua. They were blessed with much love in their home, which they purchased almost immediately after their marriage, with the down payment coming from a car accident that occurred on their honeymoon. Kevin and his dad, Dean knew how to do bodywork on cars and to paint them, so much of the payment for their damages was left to them following the accident that was the fault of the other driver…who was an honest kid, who accepted the blame and was just thankful that no one was hurt.

Over the years, Corrie and Kevin have had a number of pets, from their first…a Dalmatian puppy, to their currents…a Scottie, two Dachshunds, and a cat. Their love of pets is quite evident, and they have been equally blessed in return. The also shared their love of pets with their sons, who both have pets in their homes, now that they are grown.

With the adulthood of their children, came more changes. the empty nest that many people dread, was not their favorite time, but they have adjusted to it, and the addition of Chris’ fiancée, his little daughter, and with 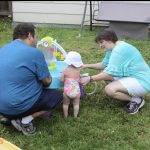 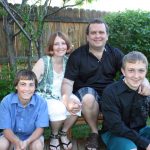 a son to follow in November, life is getting better and better every day. Both of their sons were able to keep their jobs during the Covid-19 Pandemic, and in fact were considered “essential workers,” which helped to alleviate any financial concerns for Corrie and Kevin, concerning their children. Life has been good to them, and the love in their family is filled to overflowing. Twenty seven years have flown by, which is exactly what happens when you are having fun. Today is Corrie and Kevin’s 27th wedding anniversary. Happy anniversary Corrie and Kevin!! Have a wonderful day!! We love you both!!