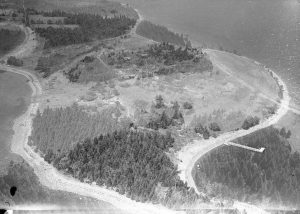 At one time or another, most of us dream of stumbling upon a buried or hidden treasure. Of course, most of those who dream about that, do so as kids, and usually after reading some story about buried treasure in a book, or watching a movie about such an event. One such buried treasure story that somehow endured for more than two centuries, is that of the Oak Island Treasure. Oak Island is located off Nova Scotia, Canada, and has been touted as the location of a money pit of buried treasure that was supposedly left there by the pirate, Captain William Kidd (1645-1701). The story seems credible enough to have led to numerous expeditions costing millions of dollars to travel to the island to search for the treasure. Unfortunately, these expeditions were to no avail, and the treasure has never been found. Perhaps it never existed, or maybe Captain Kidd or some other early treasure hunter came for it and took it away before the story even broke about its existence.

You might think that after more than 200 years, people would assume the whole thing was a hoax, give up, and move on with their lives. Well, you would be wrong. Between books and documentaries, the mystery of Oak Island’s hidden treasure is not likely to die out soon. It is even said that there must be seven deaths in search 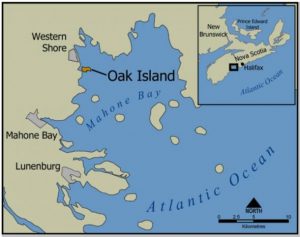 of the treasure, before the island will yield its hold of whatever might be hidden there. To date, there have been six deaths in the searches. I don’t think that would motivate me to head out and look for it.

Oak Island is a 140-acre privately owned island in Lunenburg County on the south shore of Nova Scotia, Canada. The tree-covered island is one of about 360 small islands in Mahone Bay and rises to a maximum of 36 feet above sea level. The island is located 660 feet from shore and connected to the mainland by a causeway and gate. The nearest community is the rural community of Western Shore which faces the island, while the nearest town is Chester.

Oak Island was, for the most part granted to the Monro, Lynch, Seacombe and Young families around the same time as the establishment of Chester on 1759. The first major group of settlers arrived in the Chester area from Massachusetts in 1761. The following year, Oak Island was officially surveyed and divided into 32 four-acre lots. Of course, if there was a treasure, it was already buried before the land was divided.

In 1965, a man named Robert Dunfield constructed a causeway from the western end of the island to Crandall’s Point on the mainland, making it more accessible to people. Oak Island Tours now owns 78% of the island, and 22% is owned by private parties. There are two permanent homes and two cottages occupied part-time on the 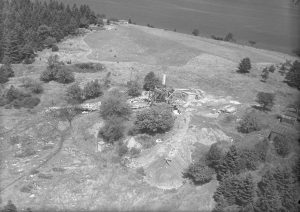 island. Since the 1850s, there have been documented treasure hunts, investigations, and excavations on Oak Island, but to no avail. There are many theories about what might be buried there, if anything really is. Areas of interest on the island with regard to treasure hunters include a location known as the Money Pit, a formation of boulders called Nolan’s Cross, the beach at Smith’s Cove, and a triangle-shaped swamp. The Money Pit area has been repeatedly excavated. Skeptics argue that there is no treasure and that the Money Pit is a natural phenomenon, but then they are probably look upon as wanting to keep any treasure for themselves. Until something is found, the treasure remains a mystery and a myth.

One Response to Oak Island Treasure