An Amazing Feat For The Feet 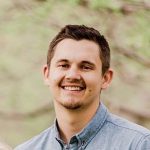 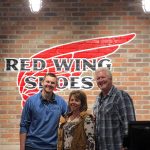 My future grand nephew, Dylan Herr comes from great stock in the business world. His family has been in the shoe business for three generations. His dad, Rob and mom, Dee Dee own nine Red Wing Shoe Stores in Colorado, and Dylan owns three, including the newest one in Brighton, Colorado. They have been in business since 1970, beginning with his grandpa, Bob Herr. They stores were recently featured by the BBB and their Featured Business of the Week. In that article, they revealed that as of 2020, they are the largest Red Wing dealer in the world. Now, that’s an amazing feat…if you’ll pardon the necessary pun, an amazing feat for the feet. I suspect that my silly pun has quite likely been heard by the Herr family many times before

Dylan joined our family when he and my grand niece Katy Balcerzak became engaged recently. The were also blessed on June 14, 2020 with their first child, a son named Max Robert Herr, and he is just such a cutie!! While Dylan can’t say that his life was ever in the dumps exactly, because he has worked hard to be a success in his dad and grandpa’s footsteps…another almost pun (there seem to be a number of them in this story), having becoming engaged and having a son have to rate very high in the annals of his life history. It’s pretty hard to beat the rush of pride one feels when becoming a parent.

Dylan and Katy are such happy people. They are filled with love for each other, and for their new little son. 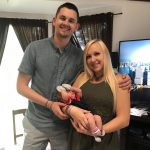 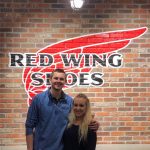 Their family is such a blessing to the rest of their families, and their happiness is a joy to watch. Dylan seems to have moved into fatherhood with ease and grace, and it’s obvious to anyone who looks at them, that daddy and son love each other very much. It makes me so happy to see Katy’s life so filled with love, and I think Dylan will make a wonderful husband for her. It is obvious to me, that when he looks at her, he is very much in love with our Katy. I am very excited for their future together, and very happy for their current lives that are so filled with joy. Today is Dylan’s birthday. Happy birthday Dylan!! Have a great day!! We love you!!

One Response to An Amazing Feat For The Feet