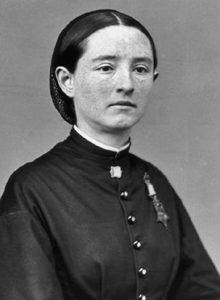 In the 1800s, however, this was not just an issue of discomfort, it was just not done. Mary E Walker was born in 1832, in Oswego Town near Oswego, New York. She was never one, to “hide her light,” but rather always stood out in a crowd. Even as a child, she was distinguished for her strength of mind and her decision of character. She grew into a very independent woman. Mary wanted to be useful. She had no desire to sit at home and be “just a housewife.” Mary was a feminist before most people knew what that was. She always had great energy, and in her early years, she wore bloomers, the pantaloon style garb of the radical feminists of the age. She decided to go to medical school, and when she graduated in 1855, she was the only female in her class from Syracuse Medical College. After graduation, she became one of the few women physicians in the country.

When the Civil War began in 1861, Dr Walker, who was 29 years old by then, journeyed to Washington DC and applied for an appointment as an Army surgeon. Of course, the Medical Department was…shocked, to put it mildly, and they quickly rejected her…with considerable verbosity. “A woman’s place is in the home,” or “No one will go to a woman doctor!” Dr Walker was not a woman who could be so easily discouraged. She stayed in Washington, and even served as an unpaid volunteer in various camps. Who would do that, and how did she survive without pay. Then, when the patent office was converted into a hospital, Walker served as assistant surgeon…again, without pay. During her time in the patent-office-turned-hospital, she was instrumental in establishing an organization that aided needy women who came to Washington to visit wounded relatives. It was a need that no one really thought about until she did, and it was probably reminiscent on the modern-day Ronald McDonald House.

As good as she was, Walker was not immune to considerable amounts of abuse over her persistent demands to be made a surgeon. Still, they could not dispute the fact that she also earned considerable respect for her many good works. It was about this time that she decided to abandon the bloomers and adopt a modified version of male attire, with a calf length skirt worn over trousers. She kept her hair relatively long and curled 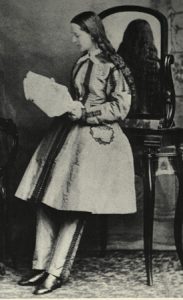 so that anyone could know she was a woman. While she wore a modified version of men’s clothes, she wanted everyone to know that she was a woman. She would not mask her talents by pretending to be a man.

Finally, in November 1862, Dr Mary E Walker presented herself at the Virginia headquarters of MG Ambrose Burnside, and was taken on as a field surgeon. She was still a volunteer, but she was a titled surgeon. She treated the wounded at Warrenton and in Fredericksburg in December 1862. Almost a year later, she was in Chattanooga, Tennessee, tending the casualties of the battle of Chickamauga. After the battle, she again requested a commission as an Army doctor, such a simple thing after her years of loyal service, I would think. In September 1863, MG George H Thomas appointed her as an assistant surgeon in the Army of the Cumberland, assigning her to the 52nd Ohio Regiment. Finally, she had her commission. Now, many stories were told of her bravery under fire. Suddenly, it was ok to talk about just how incredible she was.

Sadly, she served with the 52nd Ohio Regiment for only a short time. In April 1864, Walker was captured by Confederate troops. She had stayed behind to tend wounded following a Union retirement. The Confederates charged her with being a spy and arrested her. The spy accusation came about as a result of her male attire. They said it constituted the principal evidence against her. Dr Walker spent the next four months in various prisons, being subjected to much abuse for her “unladylike” occupation and attire, until she was exchanged for a Confederate surgeon in August 1864.

In October of the same year, the Medical Department granted Dr Walker a contract as an acting assistant surgeon. Finally, 3 years after she first showed up on their doorstep she was given the rank and pay she deserved. Still, despite her requests for battlefield duty, she was not sent into the field again. She spent the rest of the war as superintendent at a Louisville, Kentucky, female prison hospital and a Clarksville, Tennessee orphanage. After she was released from her government contract at the end of the war, Walker lobbied for a brevet promotion to major for her services. Typically, Secretary of War Stanton would not grant the request. Finally, President Andrew Johnson asked for another way to recognize her service. A Medal of Honor was presented to Dr Walker in January 1866. She wore it every day for the rest of her life. She continued in the women’s rights movement and also crusaded against immorality, alcohol and tobacco, and for clothing and election reform. One of her more unusual positions was that there was no need for a women’s suffrage act, as women already had the vote as American citizens. Her taste in clothes never changed, and caused her frequent arrests on such charges as impersonating a man. At one trial, she asserted her right to, “Dress as I please in free America on whose tented fields I have served for four years in the cause of human freedom.” The judge 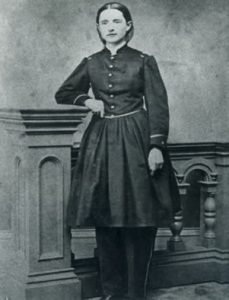 dismissed the case and ordered the police never to arrest Dr Walker on that charge again. She left the courtroom to hearty applause.

In 1916, Congress revised the Medal of Honor standards to include only actual combat with an enemy. Several months later, in 1917, the Board of Medal Awards, after reviewing the merits of the awardees of the Civil War awards, ruled Dr Walker’s medal, as well as those of 910 other recipients, as unwarranted and revoked them. It was an insult of the highest degree, and even after her death on February 21, 1919 at the age of 86, it was not to be forgotten. Nearly 60 years after her death, one of her descendants urged the Army Board for Correction of Military Records to review the case. On June 19, 1977, Army Secretary Clifford Alexander approved the recommendation to restore the Medal of Honor to Dr Mary E Walker. It was the right thing to do. Walker remains the sole female recipient of the Medal of Honor.