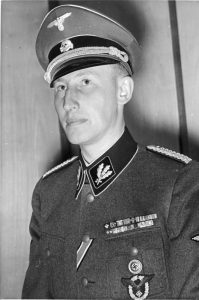 During the evil reign of the Nazi regime, we saw leaders of occupied nations being replaced by a Nazi official, who was in agreement with Hitler on the way things should be run. The deposed leader was then exiled, or worse yet, murdered. In September 1941, Reinhard Heydrich, a high-ranking Nazi official and a primary architect of the holocaust, was named Reich Protector of Bohemia and Moravia (formerly Czechoslovakia). He wasted no time in declaring martial law, and then began executing political prisoners and intelligentsia, and deported the sizable Czech Jewish community. During this time, the Czech government had been exiled to London, but they could not stand what was happening to their countrymen, so they decided to assassinate Heydrich…and so, Operation Anthropoid was born.

Two Czech agents, Jan Kubis and Josef Gabcik, had undergone extensive training by British intelligence, and on December 29, 1941, were successfully parachuted into Czechoslovakia. Once on the ground, they had to establish themselves, so they spent six months perfecting a plan with local resistance fighters, who were more 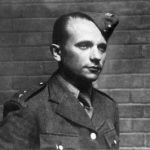 than happy to lend a hand in such an important mission. The plan was perfect. The Reich Protector didn’t think he had anything to fear from the local citizens, whom he assumed were beaten down and obedient. On May 27, 1942, Kubis and Gabcik secretly waited along Heydrich’s usual morning route to the Nazi’s Prague headquarters. Reich Protector Heydrich was an arrogant man, and he boldly rode in an open Mercedes convertible, thinking himself invincible, or at the very least well protected.

In an unfortunate turn of events, the machine gun Gabcik pointed at Heydrich, as his vehicle slowed at an L-shaped curve, misfired. Heydrich ordered his driver to stop, planning to shoot Gabcik, but Kubis tossed a 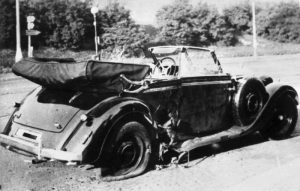 grenade and the Reich Protector’s car, which detonated near the car’s right fender. Both Kubis and Gabcik escaped and Heydrich, who initially thought he was uninjured, died on June 4, 1942. So, in the end the assassination was successful, if not strangely carried out. Unfortunately, not all resistance members are loyal, some can be bought off, and that is what happened in this case. Kubis and Gabcik were betrayed by a resistance member and died heroically, on June 18, 1942, after a gunfight with the Gestapo at a Prague church. While these men ultimately gave their lives for this cause, they were heroes, because the target, Reich Protector Heydrich was assassinated, and that was vital.