A Volcano In Wyoming 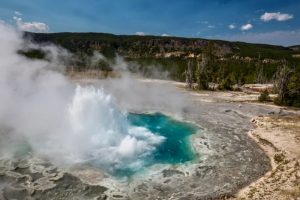 Periodically over the past few years, the subject of the Yellowstone Volcano has come up. When I think of a volcano, I imagine the high mountain peaks of Washington state, not the lower elevation mountains of Wyoming. Nevertheless, we are told that underneath Yellowstone Park is not just a volcano, but a supervolcano. The most recent volcanic activity at Yellowstone consisted of rhyolitic lava flows that erupted approximately 70,000 years ago, which says that the volcano is clearly overdue for the next eruption…or some phenomenon unique to Yellowstone Park is allowing the pressure to release enough to prevent the eruption. Of course, I’m no scientist, and my opinion is purely speculation, but we have been told that the recent large number of small earthquakes in the area could be telling when it comes to the volcano. 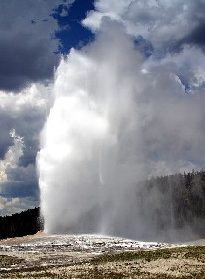 eruption, it could spew ash for thousands of miles across the United States, damaging buildings, smothering crops, and shutting down power plants.” Then, almost in the same breath, we are told that it’s possible that Yellowstone might never have an eruption that large again. Maybe I’m not so far off in thinking that the geysers, mud pits, and hot springs allow enough pressure off to avoid another eruption. Still, the earthquake swarms in the area are troubling to the scientists who monitor the Yellowstone supervolcano, but then those earthquakes have been going on for as long as I can remember too.

Time will tell, I guess, and there is really nothing anyone can do about it anyway. If the supervolcano erupts, it just does, and if not, then the scientists will have something to speculate about for the foreseeable future. Either way, the people of Wyoming, and any other part of the world that would be affected in the event of an eruption, can’t sit and worry about it all the time, or we would never get anything done. People can’t live their lives in fear of the eruption that might happen.

One Response to A Volcano In Wyoming