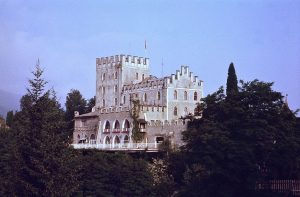 World War II was one time when the United States and Germany were absolutely not friends. The Nazi beliefs and the American beliefs were worlds apart. Nevertheless, not all Germans were Nazis, and hard to believe as that may be, it was true. Never was that more evident that at Castle Itter, a small fortification in Austria used by the SS during World War II as a prison for high profile detainees. On May 6, 1945, with the Third Reich collapsing against the Allied attacks, the German commander of Dachau, Wilhelm Weiter committed suicide. At that point, some of the Waffen SS soldiers retreated, and amid the chaos that followed, the opportunity presented itself, and a Yugoslav freedom fighter, Zvonimir Cuckovic, who was a prisoner at Dachau, escaped and went looking for some Allied troops to rescue the rest of the prisoners.

Hans Fuchs, who was a young student going to school nearby, remembers how Itter Castle was converted into a prison by the Nazis in 1943. He said, “We saw everything from our school window, a double barbed-wire fence…and floodlights so that the whole night was lit up like day.” Itter Castle, is an old castle, dating back to the Middle Ages. It was turned into a sub-unit of the Dachau concentration camp, and used for VIP prisoners, prominent politicians, and military figures that the Nazis wanted to use as bargaining chips. Famous prisoners 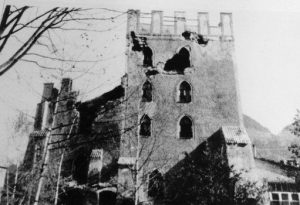 Cuckovic’s escape triggered one of the most curious battles of the conflict, but not in the way you might think. After he escaped, Cuckovic found an American armored column and got them to come with him. At the same time a Major Josef Gangl, who was an Austrian in the German Army, and had been collaborating with Austrian resistance in the closing days of the war, also intended to free the castle prisoners, but had decided instead to surrender with his men to the Americans. Gangl hated what was going on and knew that the Nazis were friends to no one. He could no longer stomach what he had been commanded to do. With the arrival of Cuckovic a hasty agreement took place. The major and his Wehrmacht troops would fight alongside the Americans against the SS guards.

The resulting battle of Castle Itter was not a major battle, just an amazing one. The SS faced not only their own countrymen and Americans, complete with a Sherman tank, but there were also Austrian partisans and French prisoners joining in. It was a wonderful show of the unifying effect the Allies had compared to the polarizing effect of the Nazis. The ensuing battle was not big, and in fact, a maximum of just 100 men were 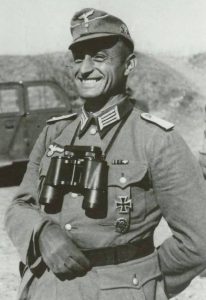 involved. Nevertheless, this battle was, without a doubt, vicious. The Sherman tank was destroyed and Major Josef Gangl was killed by a sniper. The thing that made this battle so unique, however, was that it was the only time the American army fought alongside the German army in all of World War II. The SS were handily defeated and quickly surrendered. The rest of the prisoners held at Castle Itter were released unharmed.

There have been times in many wars, when two soldiers made the conscious decision not to engage in battle, allowing both to live to fight another day. I suppose it would not be unheard of to have two opposing soldiers work together to defeat a common enemy, like maybe a bear or other wild animal, but for two army patrols of two opposing sides, to join forces against part of one sides army, is…well, unheard of. The battle at Castle Itter was just such a battle, and it is believed to be the only battle in the war in which Americans and Germans fought as allies.