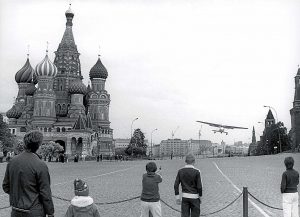 Every security detail prides itself in being able to stop any attack that might come toward the person or persons they are assigned to protect. Allowing a threat, any threat…be it a serious threat, or a minor prank…to get by the security check points, is seriously embarrassing and can be very dangerous. Never was this more widely publicized than on May 28, 1987, in Moscow.

Early on that morning, a young man named Matthias Rust, a 19 year old amateur pilot from West Germany, took off from Helsinki, Finland and headed east. Rust flew his small Cessna airplane through 400 miles of Soviet airspace, somehow undetected, and landed it in Red Square by the Kremlin. The stunt was an immense embarrassment to the Soviet government and military…to say the least. I would think that “heads would roll” figuratively speaking. Red Square should be some of the most seriously protected airspace in the world, but here a 19 year old kid blew through the protections they had in place, and brazenly landed his small plane right in the middle of Red Square!! 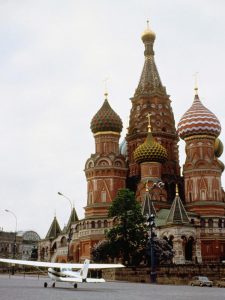 Rust was not a known troublemaker. His mother said that he was a “quiet young man with a passion for flying.” He had no known political or social agenda when he took off from the international airport in Helsinki and headed for Moscow, so what was the purpose of his flight and subsequent illegal landing. He entered Soviet airspace, but was either undetected or ignored as he pushed farther and farther into the Soviet Union, but how was that possible. He arrived over Moscow, early that morning, circled Red Square a few times, and then simply landed…just a few hundred yards from the Kremlin. The people in the square, mostly curious onlookers and tourists, believed that Rust was part of an air show. They quickly surrounded him, probably wanting his autograph. Then, very quickly, Rust was arrested and taken to jail. The charges were severe. He was tried for violating Soviet airspace and sentenced to prison. I don’t know if the charge would have normally gained him a longer prison sentence, or if they took pity on him because of his age, but Rust served 18 months before being released…probably a relatively short sentence in retrospect.

The repercussions in the Soviet Union, however, were immediate. Soviet leader Mikhail Gorbachev fired his minister of defense, and the entire Russian military was humiliated by Rust’s flight into Moscow. The United 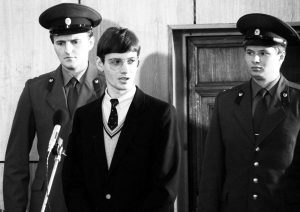 States officials didn’t make matters any easier either. They had a field day with the event. One American diplomat in the Soviet Union joked, “Maybe we should build a bunch of Cessnas.” The Soviet officials were not amused. Just four years earlier, the Soviets had been harshly criticized for shooting down a Korean Airlines passenger jet that veered into Russian airspace. Now, being able to stop one teenager’s “invasion” of the country, the Soviets became the laughingstocks. One Russian spokesperson bluntly declared, “You criticize us for shooting down a plane, and now you criticize us for not shooting down a plane.” No matter how you look at it, the situation was, to say the least, militarily embarrassing.

One Response to Militarily Embarrassing