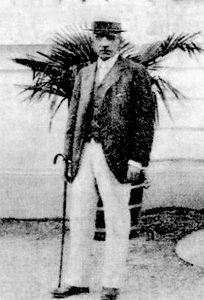 I’m not a superstitious person…don’t believe in that sort of thing, but I can a strange coincidence as clearly as the next guy. Ramon Artagaveytia was born July 14, 1840 in Montevideo, Uruguay, to Ramon and Maria Artagaveytia. December 24, 1871 found Artagaveytia sailing on the America, a ship out of Uruguay, when the boiler overheated and caught fire. The resulting catastrophic damage doomed the America to the ocean floor. Witnesses said that the America had been racing another ship into the port at Montevideo Harbor at a high rate of speed, and it is thought that the excessive boiler pressure caused it to catch fire.

At the time of her sinking, America was carrying 114 first class, 29 second class, and 30 “popular” class passengers. I’m not sure what “popular” class, was, but I assume steerage. Of the 173 passengers, only 65 survived the sinking. Artagaveytia probably would not have been one of them, but he made a last ditch effort and jumped overboard and swam for his life. He recalled later that so many of the passengers were badly burned, and the ensuing nightmares Artagaveytia suffered, kept him too terrified to travel by ship for the next 40 years. That was particularly hard for Artagaveytia, who came from a family of sailors.

In 1905, Artagaveytia took over a farm in Garamini, Argentina. In 1912, Artagaveytia was still living in Argentina, but decided visit his nephew, who was the head of the Uruguayan Consulate in Berlin. Before returning home to Argentina, he decided to visit the United States, and it was that decision that sealed his fate. Artagaveytia told his cousin that he finally felt at ease about traveling on a ship. He thought he might even be able to sleep while on board, and not stand always at the rail wearing his life jacket. The thing that finally made him feel better about travel by ships was the wireless telegraph. He finally thought that someone would know

where these ships were, and that they could arrive quickly to help if needed. With that knowledge and the peace of mind it brought with it, Artagaveytia boarded the Titanic. Everyone knows the fate of the Titanic, and how so many mistakes were made…from sailing too fast, to ignoring the warnings, to turning off that all important radio. Ramon Artagaveytia had survived the sinking of the steamer America, but he would not make such an escape from Titanic. About a week after the disaster, his body was pulled from the North Atlantic. Once they were sure of his identity, he was returned to the Uruguayan Consul at Halifax. His body was forwarded to New York and then to Montevideo, Uruguay. He was buried in Cemeterio Central in Montevideo on June 18, 1912.

2 Responses to Finally At Ease