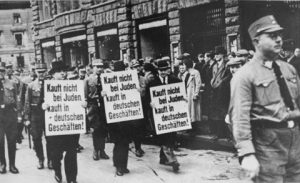 Imagine being forced to take action against your own business. Most of us couldn’t even begin to comprehend what could possibly bring about such an event, but it has happened in the past…unbelievably. On April 23, 1938, before the main Holocaust took place, but leading up to it for sure, Austria’s 200,000 Jews were thrown into a state of panic. The Nazi anti-Semitic movement was gaining momentum, the Hitler Youth were becoming more and more emboldened at the urging of their evil leader. Demonstrations were held, in front of the Jewish shops, and more often that not, the Jewish shopkeeper was forced to carry a sign and actually picket their own shops.

The situation was alarming to the Jews, as they recalled that Chancellor Adolf Hitler’s so-called “Easter Peace” was to end on April 24th. Many of the German police had been gone since Friday and all but a few German troops were scheduled to leave soon. That might have seemed like a good thing to most of us, but the Jews knew better. They expected to find the situation in Austria more completely under the control of Austrian anti-Semites who were filled with hate for the Jews. So much had changed since the March 12, 1938, when the Nazis annexed Austria. The Jewish people had been transformed from successful business people and respected citizens, to being considered less than human.

While no mention of the boycott and forced picketing appeared in newspapers, who talked only about the need to infuse a “fresh spirit” into the anti-Jewish drive, the audacity of what took place was something far more sinister than the innocent sounding call to action. This could have easily been the beginning of the horrific event known to most of us as The Holocaust. Hitler encouraged the Nazis saying, “With the Easter peace over, Jewish agitators must look forward to meeting in person that typically German personage who dons evening dress when the time comes to wield the axe.” I did not know this, but German executioners wore evening dress for beheadings…like it was a big celebration. 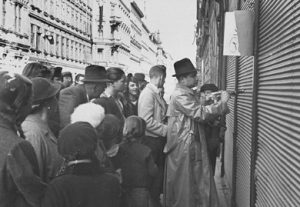