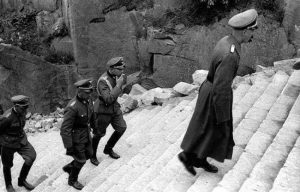 Most people who know anything about World War II, have heard of Auschwitz. Concentration camps like the infamous Auschwitz forced people to endure inhumane treatment and poor living conditions. It was one of the worst of the death camps set up by Hitler as part of the “Final Solution” killings of Jews, Gypsies, and Jehovah’s Witnesses during and right before World War II. Nevertheless, Auschwitz wasn’t the only death camp, and some were even more afraid of going to Mauthausen than they were Auschwitz.

Between 1939, when World War II began, to 1945 when it ended, more than 1 million of the 1.5 million Jewish children who had lived in the areas German armies occupied, had perished. The Mauthausen camp wasn’t as well known as Auschwitz, but it was equally horrific. Built in 1938, Mauthausen was one of the first concentration camps erected and the last to be liberated. It was a place where terrible medical experiments took place, and the guards humiliated the prisoners. Mauthausen “Stairs of Death” were especially tragic because prisoners were forced to climb to their deaths. This 186-step structure was brutal for prisoners. They had to carry stones weighing more than 100 pounds from the bottom of the quarry to the top of the stairs. Climbers often collapsed beneath the stones’ weight. Exhausted prisoners slid down the steps, knocking over other prisoners while the stones crushed their limbs. Nazi Party members called the camp “the Bone Grinder.”

Prisoners who actually made it to the top of those torturous steps, were then forced to make the most unthinkable decisions. The German guards lined up the survivors of the climb, then forced them to choose between either pushing a fellow prisoner off the cliff or being executed. Many prisoners opted to jump off the cliff. German officers called these acts “parachute jumps.” It didn’t matter if they had been strong enough to make the climb, carrying the 100 pound rocks, because they were to lose their lives anyway.

Some prisoners escaped the stairs, if it could be called escape, but they were subjected to Dr. Aribert Heim’s horrific experiments. In 1941, Heim started working at Mauthausen. His experiments involved disfiguring people indiscriminately. During his first year of employment there, guards brought in an 18-year-old Jewish athlete with a foot infection. “Heim put the teen under anesthesia, cut him open, removed his kidney, and castrated him. Finally, the doctor removed the athlete’s head, then boiled the skull to remove all the flesh. He kept the severed body part as a trophy.”

Austrian winters are brutal, with temperatures dropping to around 14 degrees Fahrenheit. The guards at Mauthausen used the frigid temperatures to torment and execute inmates. They took groups outside, forced them to strip naked, then sprayed them with water. The poor terrified prisoners were the 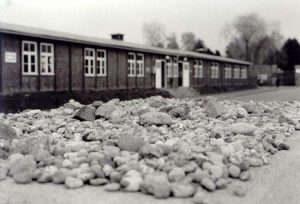 left to freeze. Many died of hypothermia. The guards also “enjoyed” physically and mentally abusing their prisoners. Former inmate and French resistance fighter Christian Bernadac said Mauthausen was “infernal, without a second’s rest.” Officers offered prisoners breaks from the grueling work, but then executed those who accepted. Mauthausen survivor Aba Lewitt recalled a man who met that fate: “The guard said [to the man], ‘Well, then, sit over there’ – then he shot him. [He] said the inmate tried to escape the camp. That happened umpteen times every day.”

The Germans created Mauthausen to benefit Adolf Hitler’s army. They needed granite and brick for Linz, a neighboring city the dictator hoped to rebuild with huge, elaborate structures. The concentration camp sat on the edge of a granite quarry, and prisoners collected the plutonic igneous rock to form Mauthausen’s main structures. Inmates called their time there “vernichtung durch arbeit,” or “extermination by work.” They did not expect to return home.

Mauthausen was a central concentration camp, but it had numerous subcamps that surrounded it. The subcamps were connected by underground tunnels. One of these smaller subcamps, the Gusen complex, was the place they took people who were too weak to work. Gusen inmates were simply thrown on the ground and abandoned. People there were piled on top of each other, often unable to move around and covered in human excrement. German guards rarely distributed food in Gusen, so the prisoners simply starved to death.

Crazed prisoners at Mauthausen allegedly resorted to cannibalism to survive. Food was so scarce in Mauthausen, and sometimes high-ranking German guards like Oswald Pohl cut the rations in half. To stay alive, some inmates resorted to cannibalism, particularly during the winter months when other sustenance such as grass and sand was scarce. A black market of stolen meat emerged. Allegedly, “meat” came from dying inmates. Cannibalism became so rampant that extremely ill prisoners feared sleeping, afraid others might remove chunks of their flesh.

Mauthausen guards had nothing but time to come up with the most horrific ways to torture the prisoners. Sometimes they ordered them to pick strawberries in a field and then shot them…saying they were trying to escape. Concentration camp leaders also threw prisoner’s hats near the structure perimeters and shot whoever tried to retrieve their belongings. Barbed-wire fencing surrounded Mauthausen. The guards loved dangling “freedom” in front to the prisoners, or at least saying that the prisoners were trying to escape. Some inmates ended their own lives by throwing themselves against the fence. That didn’t usually end their lives instantly. The prisoner would just hang there, stuck in the wire, for days until they finally died.

Mauthausen was finally liberated when World War II ended in 1945, but many of the inmates never received 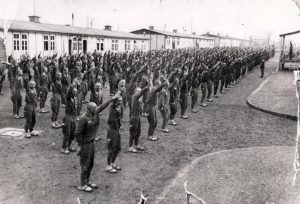 justice. They died before help arrived. The Austrian concentration camp claimed about 100,000 lives and thousands more were lost after their release. Allied soldiers didn’t understand the gravity of the situation when they arrived in Mauthausen. They were trying to help when they threw chocolate to the starving inmates. Chocolate has lots of calories, and is often given as a source of energy, but many of the inmates died, because their bodies could no longer digest solids. I can’t imagine the horror the soldiers must have felt, knowing that in trying to help, they had inadvertently caused the death of these poor prisoners. The camp was liberated on that day in 1945, but the terror that was daily life in Mauthausen will never be forgotten.

2 Responses to Stairs Of Death