The Kind Of Woman She Was 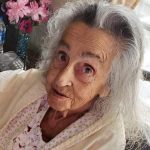 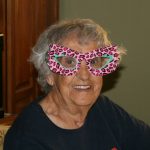 Very early this morning, a beautiful lady went to Heaven. Aunt Virginia Beadle was first and foremost a mother to her children. She loved each and every one of them so much, and always considered herself to be very blessed by her children and later her children’s spouses. She enjoyed every one of her grandchildren, and her last granddaughter was named after the daughter Aunt Virginia lost in 1967…Christy. Aunt Virginia loved children…of all ages. In her early live, she and her first husband adopted a son, Forrest, and she loved him dearly. He passed away in 2005, and the loss was devastating to her. After the loss of these two children, she focused her life on the rest of her kids, and any others that she could help. She was truly a great woman, often known by those she helped as the “patron saint of lost children.” Over the years, she took in so many kids. It didn’t matter what their need was. They might be troubled, drugged out, or lost…it didn’t matter to her. She was there to help in any way she could. She always looked for the good in people, and I don’t know of anyone in whom she could find no good. Those who knew her, her kids, grandkids, and her nieces and nephews loved her dearly. My cousin Elmer Johnson spent time with her when he could over the years…probably more than most of the nieces and nephews did. When he lost his own parents, Elmer and Delores Johnson, I’m sure she was there to help ease the pain. That 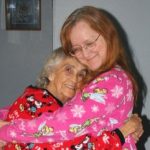 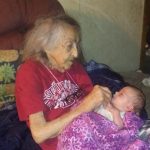 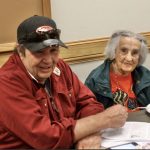 was the kind of woman Aunt Virginia always was.

Aunt Virginia’s latter years were spent surrounded by her family, living until recently with her son, Steve and his wife, Wanda. There, her family gathered to spend quality time with their mom, and dad, until Bill’s passing on January 17, 2018. There, her sons Steve and Billy, with their families, and her daughter, Betsy, with her children, and her grandchildren talked, laughed, and even cried with their mom as she went through the last days of her life. Most recently, Aunt Virginia needed full-time care, so it was decided that she would move in with Billy and his wife, Janie, who did not work outside the home. That meant that Janie could care for Aunt Virginia’s more full-time needs. Aunt Virginia said of her children and their spouses, “I have been so lucky.” I don’t think is was luck, however. I think that her children and their spouses are simply amazing people who loved their mom/mother-in-law very much, and who would do anything for her.

As my cousin Elmer pointed out to me today, now Aunt Virginia gets to reunite with Bill; her son, Forrest and 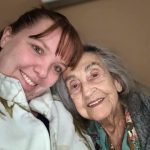 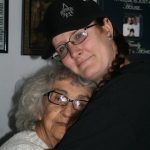 daughter, Christy; her sisters, Evelyn, Delores, and Collene; her brother, Larry; and brothers-in-law, George, Elmer, Allen, and Jack; and of course, her parents, George and Hattie. She leaves behind some good kids and so many she helped to turn their lives around, and for that, she will forever be remembered. Aunt Virginia’s life was full and she was and is loved by all those she touched. No matter how tough things were for her, she would give the shirt off her back to anyone who needed it. That was just the kind of woman she was…a tough one, for sure. Rest in peace now Aunt Virginia. We will love and miss you always.

12 Responses to The Kind Of Woman She Was