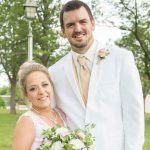 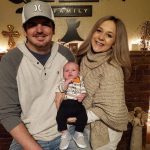 My grand-nephew, Nick Olsen, who joined our family, when he married my grand-niece, Siara Harman, is truly right where he should be. I think he was destined to be a husband and father, and now, with the recent birth of his sweet Alec Todd Olsen…Nick and Siara are parents. Nick is a wonderful daddy to little Alec, and can often be seen holding him, and the picture is beautiful. Alec loves his daddy so much, even at this early stage in his life. Both Alec and Siara feel very blessed to have Nick in their lives, and he feels blessed to have them in his.

Nick is a quiet man. That’s ok, because his face shows his feelings very well. When Nick looks at Siara, you can see how much he loves his beautiful bride. And when Nick looks at Alec, you can see the great love he has for him and the joy he feels from being a daddy. Not every man has such an expressive face, but Nick certainly does. Or maybe, a lot of men mask their faces, so you can’t see how they feel. I think that it’s very sweet that Nick expresses his feelings like that. I think Siara likes it too.

Nick and Siara make such a cute couple. He is very tall, and she is very short. I think they both knew from the day they met, that they would be together for the rest of their lives. Nick is the type of man who will always be 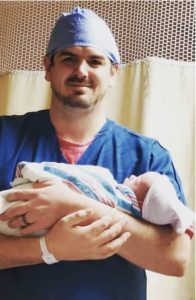 there for his family. He will protect them, provide for them, and love them for all time. It is written all over his face. Siara and Alec are very blessed to have him.

Nick is a Seattle Seahawks fan, while Siara is a Pittsburgh Steelers fan. Since they are both very into football, I suppose that could get to be a battle of the rivals, although I don’t think these two teams are arch rivals. It makes me wonder if little Alec will follow his daddy’s team or his mommy’s team. I suppose he will root for both for a while, because it is my guess that he will love to watch the games as much as his parents do. For Nick, I’m sure this will become another father/son bonding moment, and that is very cool. Nick’s future is bright indeed. Today is Nick’s birthday. Happy birthday Nick!! Have a great day!! We love you!!