Graveyard Of The Pacific 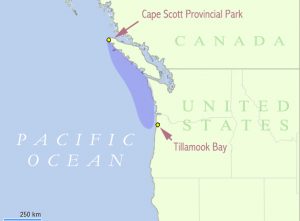 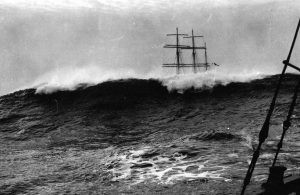 When my daughter, Amy Royce and her family moved to Washington state a few years ago, I began to take an interest in the Pacific Northwest. I think mostly it was so that I could tell her about things to go see. I don’t know how interested a non-tourist is about those things, but I have certainly found that I am.

Like anyplace where there is shipping, there is likely to be shipwrecks. The Great Lakes, with their horrible weather conditions in the winter months, are littered with them. The waters of the Pacific Northwest have somehow always seemed rather benign to me, but as I learned about an area called The Graveyard of the Pacific, it occurred to me that maybe they are anything but benign. The Graveyard of the Pacific is a somewhat loosely defined stretch of the Pacific Northwest coast stretching from around Tillamook Bay on the Oregon Coast, running northward past the treacherous Columbia Bar and Juan de Fuca Strait, and up the rocky western coast of Vancouver Island to Cape Scott. Unpredictable weather conditions, fog and coastal characteristics such as shifting sandbars, tidal rips and rocky reefs and shorelines which are common to the area, have claimed more than 2,000 shipwrecks in this area. That makes the area, in my mind anyway, practically cluttered with debris.

In a way, it makes perfect sense, given the fact that many of our nation’s storms enter the continental United States from that area…excluding the tropical hurricanes, of course. With the unpredictable and frequently heavy weather and a rocky coastline, especially along Vancouver Island and its northwestern tip at Cape Scott, have endangered and wrecked thousands of marine vessels since European exploration of the area began in the 18th century. The area has claimed more than 2000 vessels and 700 lives near the Columbia Bar alone, and one book about shipwrecks lists 484 wrecks at the south and west sides of Vancouver Island. Combinations of fog, wind, storm, current and waves have crashed hundreds of ships in the region by the middle of the twentieth century, including famous wrecks in regional history.

The area is home to some famous and dangerous landmarks…Columbia Bar, a giant sandbar at the mouth of the Columbia River; Cape Flattery Reefs and rocks lining the west coast of Vancouver Island; and the Strait of San Juan de Fuca. The shipwreck charts of the area are studded with wreck sites. There have been a number of salvage attempts, but they are often unsuccessful or of limited success, and physical wreckage is usually minimal anyway due to the age of many wrecks. The weather is very unpredictable and the sea conditions harsh. This brings extensive damage to the vessels at the time they were wrecked.

The term, The Graveyard of the Pacific is believed to have originated from the earliest days of the maritime fur trade, not only as increasing numbers of traders’ ships began to be wrecked, but also because of the ongoing 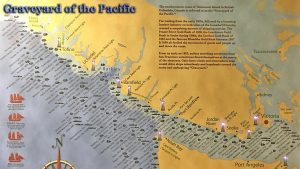 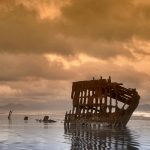 state of incipient warfare in the area between Russia, Spain, Great Britain, and native tribal peoples, making it one of the most dangerous and deadly regions to trade in the Pacific for political as well as climatic reasons. Although major wrecks have declined since the 1920s, several lives are still lost annually. The Graveyard of the Pacific remains a dangerous area, but with modern science, storms aren’t as unpredictable, so watching weather reports can prevent many dangerous situations.