With Determination, He Persevered 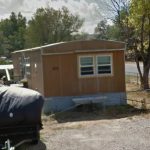 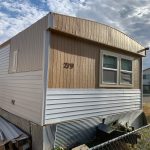 My son-in-law, Kevin has always been a capable home renovator. He has fixed up and beautified each of the homes he and my daughter, Corrie and their family have lived it. It was a big part of what made him feel useful. Since he became disabled, I worried that he would no longer be able to do the projects he wanted to do on their home. In some ways, that has been the case. He is in pain often, and that limits the activity he can do. Nevertheless, Kevin is a very determined person. When he sets his mind to a task, he sees it through, even if it takes him much longer than it would have years ago.

This summer found Kevin deciding to reside their mobile home. They sold their house and paid cash for this mobile home when Corrie went back to school. They knew that with school and Kevin’s disabilities, they would 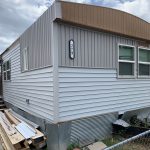 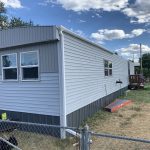 need to reduce the family budget, and since their sons, Chris and Josh, are now grown and living on their own, they could downsize and save money. They bought a two bedroom mobile home and paid for it in full. It was nice, but it was older.

Kevin has worked on the interior, whenever his pain level allowed, and it looks very nice now. Still, the exterior was very dated and dingy looking. It was not what they wanted it to be. Corrie worked a great deal of overtime hours this summer, and it allowed them to buy new siding. They were very excited. Kevin has worked off and on putting up the siding for several weeks now, and the results have been amazing. Kevin even surprised Corrie with a cute floral “Welcome” sign for the front of the home. She had no idea he was doing that. The siding looks very professional, but that is 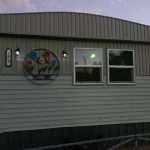 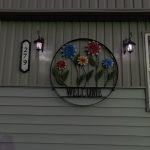 how all of Kevin’s work looks. He doesn’t like to do a job half way or sloppy. That’s just not Kevin’s style.

We are all very proud of the beautiful job Kevin did on the siding. We know the sacrifices he made to get this done…and done right. We know the aches and pain he went through, and we are very proud of his accomplishment on the house. Once again, with determination, he persevered; and the work he did is just beautiful. Today is Kevin’s birthday. Happy birthday Kevin!! Have a great day!! We love you!!