As I have researched the infantry soldiers of World War II, my thought was that I was really thankful that my dad, Allen Spencer was not one of those men on the ground during the fighting. I felt bad for those men who were on the ground, fighting from the foxholes. I still do, because they were in constant danger. Bombs fall from the sky, and bullets fly from across the battlefield. If those things didn’t kill a soldier, the freezing cold, trench foot, or dysentery from the horribly unsanitary conditions could. It seemed that my dad’s situation was by far safer, but now, I’m not so sure that’s true.

The book I had been listening to, that took in World War II from D-Day to The Battle of the Bulge, talked mostly about the ground war, but then at the end, the reader said something that really struck me. It was about the look that crossed the face of a bomber crew’s faces before certain missions…those that would inevitably find the plane flying through flak. The look was one of fear. I knew flak was dangerous, but somehow I didn’t really connect flak with bringing down a plane, or seriously injuring its occupants. Nevertheless, it is quite dangerous for them.

As I researched the dangers of flak, a shocking revelation made itself known. I had written a story about the life expectancy of the ball turret gunner. My findings were that that life expectancy was about 12 seconds. That may be true when one is talking about the prospect of being shot, but when it comes to flak, that cannot be said. Apparently, where flak is concerned, the best place to be is in the plexiglass structure of the ball turret. Plexiglass holds up better against flak than other areas of the plane, so the ball turret gunner is much more protected…at least from flak. The same cannot be said for the bullets flying through the area. I was thankful that my dad was not a ball turret gunner, and that he only filled in as a waist gunner periodically. The waist gunners were in the open, where protection from bullets, and from flak was minimal…at best, non-existent at worst. I can’t imagine how those memories must have affected my dad, but in the book I listened to, the main reason many of the men didn’t want to talk about their experiences in World War II, or any war, was because talking about it brought those memories flooding in again.

After researching flak, and how it works, I can see why the men would get a look of fear on their faces as they prepared to go through areas anti-aircraft weapons shooting flak into the air. Some men said that they could see the red hot glow in the center of the flak, if it was very close. That tells me that it was like a small explosive devise. No wonder it could bring so much damage to a plane. I had known that flak could put holes in the fuselage, but somehow I hadn’t tied that with bringing down a plane. I surmise that it was the B-17 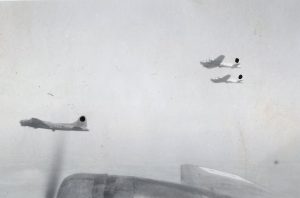 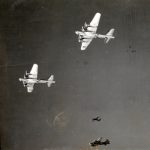 bomber top turret gunner’s daughter in me that wouldn’t allow me to place that danger around my dad. I didn’t want to think about the dangers of his every mission in World War II. My mind seems to have placed his plane in a bubble or a force field, so that no danger could come near him. I think every veteran wonders why they were spared, when others didn’t make it back home. I don’t think anyone can answer that question. As a Christian, I have to credit God for bringing my future dad home.