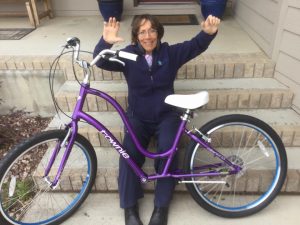 Shortly after my sister-in-law, Brenda Schulenberg lost a large amount of weight, she decided that she wanted to do something that she didn’t really get to do as a kid…ride a bicycle. Because her knees wouldn’t really allow her to work the pedals at that time, she looked into various kinds of bicycles. She considered the recumbent bicycle, but that didn’t work very well, because while she could sit in a chair-like position, the pedals still needed to be brought back toward her, meaning that her knees needed to bend quite a little bit.

Finally, she settled on a strider. It was an idea she got from our nephew and niece, Eric and Ashley Parmely. When their kids were too little to pedal a bicycle, they got them a strider, which is a pedal-less bicycle. The child basically sits on the seat, but runs the bicycle along using their feet for power. The seat is low enough to allow 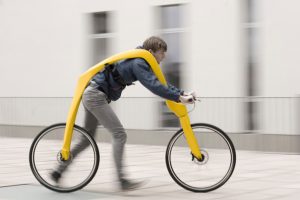 the child to have control, so they don’t fall over. It was a perfect idea for Brenda as well, because it let her be on a bicycle, but not have to pedal, which her knees would not allow at that time. These days, with her excess weight all gone, Brenda has put the pedals back on her bicycle and she can ride it normally.

Someone else apparently thought the pedal-less bicycle was a good idea too, but in my opinion, their “bicycle” idea pretty much defeats the purpose. The invention is called the Foot Powered Bike, but to me it looks like the “rider” is carrying the bike around. The bike basically wraps around the “rider” and there is no seat at all. There are handlebars, but no pedals, seat, 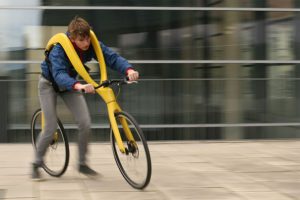 or bicycle chain. In the matter of the chain, I guess that you couldn’t get your clothes caught in something that isn’t there, but in looking at the way the “rider” must maneuver the bike, it seems to me that the contraption would be very easy to trip the “rider” up. In running along, the “riders” legs must straddle the back wheel. That is where the dangerous part comes in…in my mind anyway. Walking, or running, with a wheel between your legs is awkward, to say the least. I think most people would find their legs tangled up in that wheel, and any thought of “riding” this contraption would be lost, but the strangest part of this is calling it a bike at all. No seat, no pedals, and no chain…yep, I call that defeating the purpose.

One Response to Defeating The Purpose