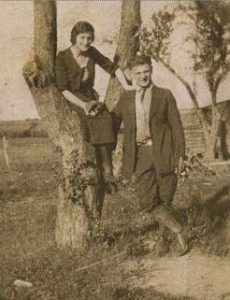 Every family struggles to find ways to do things together…not to mention the time to do so. Kids have their own activities, such as sports, dance, and other club and school activities. Parents work, kids have school, and then there are things that need to be done around the house. By the time dinner is cooked and eaten, and the table cleared, who feels like doing more activities. Plus, there is homework to be done. It seems like there isn’t time for anything more than a television show before bed.

Most of us think this is just something that has come with modern day families, where they barely have time to eat dinner together…if that. In reality, it is a problem that has been around for a lot longer. Kids just naturally grow up and become more independent, and parents get busier too. Something had to be done, so in 1939, so Charles Steinlauf stepped up. He didn’t build his bicycle for a record, because there wasn’t such a thing then. The Guinness book of records didn’t begin until the early 1950’s. Nevertheless, he was some “inventor” to use the word lightly. His was an interesting bicycle, and apparently it held something for everyone…I guess. As odd as it was, the bicycle really 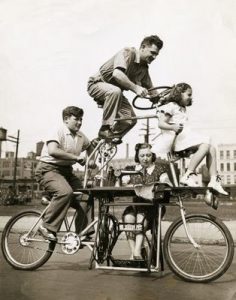 did work. The top rider, namely Charles steered the bicycle with an automobile steering wheel. His wife sat below operating a sewing machine. Their son was in back and their daughter sat on handle bars in front. When they stopped, the legs of the sewing machine kept the two story Goofybike, as it was called, from falling over. I don’t know any other way to safely stop it.

It might have been one of the strangest inventions in history, but, it did get his family out and about in Chicago, Illinois, and I’m certain it also brought them quite a bit of notoriety. I’m sure that there were lots of people who that of Steinlauf as that “weird inventor,” and to be honest, it looks like he just hooked a bunch of odds and ends together. It was, however, a little more technical than that, after all, just hooking a bunch of things together, does not a bicycle make. It has to be able to be ridden in order to really qualify as a bicycle, weird or not. And the Goofybike could be and was ridden by the whole Steinlauf family.