They Were A Team 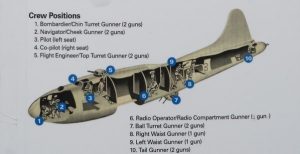 B-17 crews were a tight group. Mostly these crews flew with the same crew on missions, but sometimes, someone was sick, went home, or was killed, and crews changed. For that reason, it was vital that everyone know their responsibilities. We shouldn’t write about the B-17 as a bomber without writing about the crew. In reality, the crew and their Fortress worked much like one unit. I think the crew came to love the fortress that kept them safe.

In the cockpit, you would find the standard, pilot and co-pilot. The pilot was the commander of the crew. He was in command of the B-17, but he was also responsible for all aspects of crew training, discipline, safety and efficiency at all times, but he was more than the commander, he was also one of the crew, he wasn’t a gunner, but it was his job to bring these men home. The co-pilot was the executive officer. He must be as familiar as the pilot with all aspects of flying the B-17, ready to take over both as pilot and commander, if necessary. The B-17 required a flight crew of two to fly the plane, much like modern day jets. The co-pilot operated the instruments on the right and instruments on the left were run by the pilot. Nevertheless, in an emergency, one could fly the plane.

The navigator had the job of making sure that the plane made it to the target, and back home again. He used one or more ways of navigating: dead reckoning; using charts and visual references; pilotage, using charts along with time, distance, and speed calculations; use of radio navigation aides; and using the sun observations or at night using stars and planets. As the B-17 gets close to the target, the bombardier takes over command of the plane (including flying) as they approached the bomb target. Then, when they arrived at the target he released the bombs. Accurate bombing was crucial and that was the bombardier’s responsibility. If he wasn’t accurate, they could hit a school, a neighborhood, or other civilian area. Later on in WW II, the navigator and bombardier positions were combined into one position done by one man. 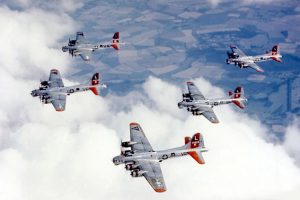 A typical crew had four gunners, sometimes less. In a configuration of four gunners there were two waist gunners (right and left), a tail gunner, and a ball turret gunner. The two waist gunners station was in the middle of the plane. As the name implies, the tail gunner’s position was in the tail and the ball turret gunner (a small man) position was in a turret underneath the B-17. Each gunner was responsible for their own armament and ensuring that their guns were in working order. Their whole job was to keep the enemy planes and enemy fire off of the B-17. So close was the relationship that these 10 men shared, that many would go on to remain friends for life, and even name their children after their respected crew mates.