One Good Arm And A Head Injury 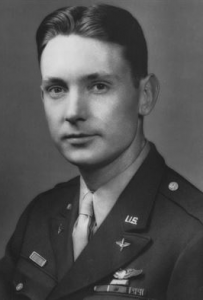 The pilots of the war birds were brave men. They were tasked with staying the course while under heavy anti-aircraft fire and flak. That would be a major undertaking for most of us because in that situation, all our mind can think to do is to turn and run. These men had to stay in place so they could make the bomb runs, or protect those who were. Of course, there were gunners tasked with keeping the enemy planes at bay, but they couldn’t fly the plane to get you home.

United States Army Air Force Lieutenant William R Lawley Jr, was a pilot on a B-17 Bomber on February 20, 1944. It was the first day of “Big Week,” and Lieutenant Lawley’s Boeing B-17 Flying Fortress was at the head of a formation of one thousand bombers sent to bomb Germany’s production and aircraft manufacturing facilities. “Big Week” was the Allied plan to spend seven days ruthlessly dropping explosives onto enemy aircraft production facilities deep behind enemy lines. Day and night, wave after wave of American B-17 Flying Fortresses, B-24 Liberators, and British Lancasters blasted shipyards, railroad junctions, power plants, airfields, steel production facilities, dams, and military bases relentlessly, igniting everything from ball bearing plants to oil refineries up into towering explosive fireballs, to make it impossible for anyone in Germany to build a working fighter plane.

Suddenly, the call rang out, “Bandits, incoming, three o’clock high!” Immediately, the gunners began shooting to fight off the enemy planes, while Lawley held the plane steady. The loud, rumbling propellers roared as he pushed open the throttle and smashed through a thick black cloud of anti-aircraft smoke at nearly three hundred miles an hour, all while keeping in tight formation with hundreds of other B-17s. A pair of Nazi Focke-Wulf 190 fighter planes screamed by, ripping off thousands of rounds from twin-linked machine guns and heavy 20mm autocannons. Black puffs of enemy artillery popped up all around Lawley’s massive aircraft craft. The enemy fighters screamed past at speeds of over four hundred miles an hour. As the gray Nazi fighters dove down towards another squadron of American bombers below, Lawley’s starboard waist gunner zeroed in on them with his .50-caliber machine gun with a quick burst of tracer fire, but had to release the trigger as a pair of American P-47 Thunderbolt fighter planes dropped in to chase them. These Bomber raids were nothing new for Lawley. Born in Alabama, this 23 year old veteran pilot had already flown nine missions over Germany in the last year. This was his tenth mission, but the first at the controls of a brand-new B-17, nicknamed Cabin in the Sky III, because the first two Cabin in the Sky aircraft been blown up.

Suddenly, voices on the intercom called out enemy fighters, this time diving down from behind. With the sun at their backs, blinding the tail gunner, the Focke-Wulfs ignored the deadly clouds of flak ripping apart the sky around them and hurtled straight into the B-17 formation. Their 20mm cannons struck home at one of Lawley’s wingmen, catching her engines on fire and dropping her out of the sky like a brick. Another flak explosion hit even closer, rocking Cabin in the Sky III and peppering one of the engines with shards of metal, causing it to burst into flames. Lawley ordered the copilot to shut it down and kept moving. More calls came in. “Six o’clock low.” “Three o’clock level.” The Nazis were everywhere, attacking from seemingly every direction at once. The B-17s stuck close together, knowing that the only way to survive was to stay close and lay down heavy fields of 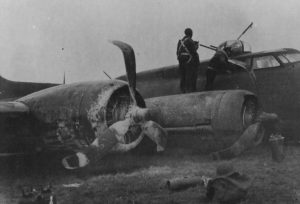 machine gun fire. As his gunners fired in every direction, Lawley looked through his cockpit window to see a fleet of twenty or so 190s drop down in front of him, pick out targets, and open fire. With a deafening crash, a 20mm high explosive autocannon shell bust through the front window of the pane, exploding in the cockpit. Everything went black.

Lawley snapped awake seconds later, his ears ringing. Alarms were going off all across his console, which was now riddled with shards of shrapnel. His right arm was shattered. Through blurry vision, Lawley saw his co-pilot slumped over dead, his body laying on the control stick pushing it forward, putting the plane was in a steep dive. The loaded bomb racks made matters worse. The pilot-side window was smashed, and broken glass had gone into Lawley’s face, arms, and side. The windshield was so smeared with blood and oil that he could barely see out of it. Another engine was one fire. Lieutenant William Lawley didn’t panic. He did his job. Determined to keep his plane and his crew alive, the veteran USAAF pilot reached out with his shattered right arm, grabbed his dead co-pilot, and somehow pulled him back off the controls. Then, with just his left hand, he manually fought a 15-ton bomber aircraft out of a ninety-degree nosedive at 12,000 feet, leveled it off, and shut down the second burning engine. Looking up, he saw the Focke-Wulf pilots circling around for another pass, so this grim warrior made an evasive turn, dove the plane down into the cloud cover, and accelerated out of there as fast as he could. Other B-17s in the formation had radioed Cabin in the Sky III as Killed in Action, but somehow William Lawley managed to evade the enemy fighters and get the heck out of Leipzig. He flew across Germany, dodging enemy AA positions, then flew in low over the French countryside and ordered the surviving eight members of his crew to grab parachutes and bail out. It was then that he learned all eight crewmen were wounded in the attack, and that two of them were hurt so bad they couldn’t possibly go skydiving right now. Lawley said, “Ok. I’m going to get us home then.” Nobody jumped out of the plane.

The bombardier eventually got the racks unstuck and released his bombs over an unimportant part of the French countryside, but before long another squadron of Me-109 fighters picked up the wounded B-17 on radar and came swooping in for the kill. With his guys running to their guns to bark .50-caliber machine gun fire, Lawley hammered the stick of his crippled plane, dodging and evading with one arm and somehow eluding enemy fighters one more time. In the process, however, he had to use more fuel than he’d have liked, and one of the two remaining engines was now almost completely out of gas. Once the coast was clear and the Messerschmitt fighter planes were gone, Lawley leveled off the plane and promptly passed out from loss of blood. This was the days before autopilot, and Lawley was the only guy who knew how to fly the plane. Luckily his navigator figured out what was up and woke him up pretty much right away. 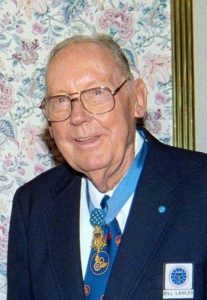 Cabin in the Sky III somehow reached the English Channel against all odds, received emergency landing permission from a Canadian fighter base on the English coast and, just in case you’re wondering how the heck this could possibly get any worse, when William Lawley hit the button to drop his landing gear, it didn’t deploy. So, limping in with three burned-out engines, “feathering” his only working one by pumping it off and on with small amounts of gas, half blinded by broken glass, exhausted from loss of blood, and with no landing gear, eight wounded crew members, and one good arm, Lieutenant William Lawley attempted to crash land a 15-ton B-17 on a grass airfield about the size of a soccer pitch. He came in hard on his belly, sliding across the airfield, finally coming to a rest just outside the Canadian barracks. Every member of his crew survived. Lawley walked out of the wreckage, spend a few weeks in the hospital, and make a full recovery. He successfully piloted four more bombing missions before the war was over. Did he earn his Modal of Honor? Without a doubt!!