Bringing Down The Rumrunners 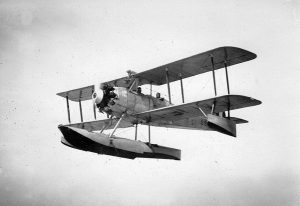 On January 17, 1920, the law prohibiting the use or sale of alcohol in the United States went into effect. Before long, illegal bars, called speakeasies were trying to pass off dangerous locally made industrial alcohol as the real thing, but customers were quickly rejecting the foul-tasting brew. The people were demanding quality, authentic Scotch and other liquor “right off the boat.” Within weeks, organized smuggling of imported whiskey, rum, and other liquor, called Rumrunning began. Among the customers for imported booze from Europe, Canada and the Caribbean were the nation’s bootleggers who ran and supplied thousands of speakeasies. Tops among them were Big Bill Dwyer (dubbed “King of the Bootleggers” by the press) and Mob bosses Charles “Lucky” Luciano in New York and Al Capone in Chicago.

Liquor was smuggled in from any country where it was still legal, and the Rumrunners would then have to find new and unique ways to get it to their buyers. Shipments of whiskey from Great Britain traveled to Nassau in the Bahamas and elsewhere in the Caribbean, before being smuggled to America’s East Coast and New Orleans. Whiskey distilled in Canada was smuggled by ship or across land to the West Coast from British Columbia, to the Midwest from Saskatchewan and Ontario, and to the East from Nova Scotia and the French island of Saint Pierre, a liquor smuggler’s hotspot off Newfoundland. Loads of rum from the Caribbean, imported champagne, and other alcohol also made it ashore. Captains of boats loaded with liquor bottles in false bottoms beneath fish bins anchored offshore at designated areas waiting for “contact boats,” small high-speed crafts with buyers who tossed aboard a bundle of large bills bound by elastic bands, 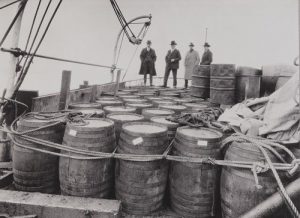 loaded their liquor orders onto their boats and sped to shore to load it onto trucks headed for New York, Boston and other cities. One such stretch of ocean for liquor-selling boats, famously called “Rum Row,” ran from New York to Atlantic City, 12 miles out in international waters to avoid the U.S. Coast Guard.

The “golden years” of rumrunning were the early 1920s…before Bureau of Prohibition agents, local police and the Coast Guard knew just what liquor smugglers were up to. On the Detroit River, Detroit’s vicious Purple Gang used speed boats to run liquor into town from Windsor, Ontario. They also hijacked the loads their competitors. One infamous Western rumrunner was Roy Olmstead, who shipped Canadian whiskey from a distillery in Victoria in southwestern Canada down the Haro Strait, stashing it on D’Arcy Island on its way to Seattle. Olmstead was making $200,000 a month before Prohibition agents tapped his phone, leading to his arrest and end as a rumrunner in 1924. Individual bootleggers transporting booze by land to Seattle would hide it in automobiles under false floorboards with felt padding or in fake gas tanks. Sometimes whiskey was mixed with the air in the tubes of tires. To fool authorities at the border, a smuggler might have a woman and child inside his car with hidden liquor or even stow it inside a school bus transporting children. Out at sea or on the Great Lakes, rumrunners in schooners or motor boats contended with the Coast Guard, rough weather and frozen water. Even worse were the “go-through guys,” hoodlums armed with pistols and machines guns in speed boats who hijacked the ships, stole cargo, cash, and at times killed rumrunners’ crews and sank their ships.

The fast-moving rumrunners frustrated the Coast Guard so much by 1923 that Commandant William E. 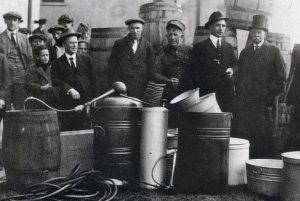 Reynolds asked the federal government for 200 more cruisers and 90 speed boats for patrols to catch up with the contact boats. The agency also added 36 World War I naval ships to enforce Prohibition and employ 11,000 officers and crew. On June 20, 1923, a large fleet of Seaplanes were to be mobilized in an attempt to catch rum smugglers off the Atlantic Coast, it was believed these would be more successful than current means of catching the rum runners who are equipped with very fast boats that are outrunning federal agents. The reality is that they never really stopped the smuggling of liquor into the United States, and in the end, prohibition proved to be a miserable failure. On December 5th, 1933, when the 21st Amendment was ratified, Prohibition was abolished in the United States.

One Response to Bringing Down The Rumrunners