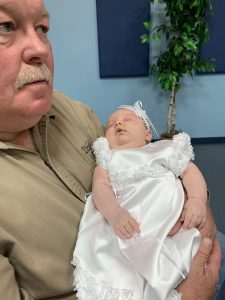 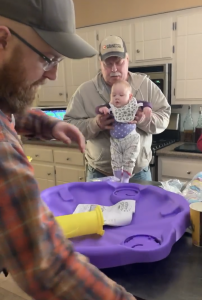 For my brother-in-law, Mike Stevens, this has been an incredible year. Probably the greatest year since the year his first child, Michelle was born. This was the year Mike became a grandfather to his granddaughter, Elliott Michelle Stevens. Elliott was born on August 3, 2018. Her parents are Mike and my sister, Alena Stevens’ son, Garrett and his wife Kayla Stevens. Becoming grandparents was something Mike and Alena have been waiting to be for a long time to be grandparents, and little Elliott has fulfilled a very special dream of theirs. Mike and Alena are very family oriented, and adding a granddaughter takes their family life into a whole new dimension…a very special dimension.

Mike is a sports fanatic, and loves to share his knowledge with his kids and maybe down the road, his granddaughter. Mike knows a lot about sports, any sports. Not everybody who likes sports, really understand the logistics of the sport, but Mike understands it. Summertime brings different kinds of sports. Mike loves softball, and sometimes is on a team. This year Mike and Alena bought a new 4-wheeler, and they are looking forward to spending lots of time on the mountain riding around on the 4-wheeler. In fact, they had planned a weekend on the mountain for Mike’s birthday, but the weather refused to cooperate…something many of us are disgusted with. Hopefully this spring/summer won’t prove to be ultra-rainy, so they will have lots of time to use their new toy.

Another of the sports that Mike likes is the yearly family camping trip to Boysen Reservoir, where they hold the Stevens’ Family Horseshoe Tournament. The whole Stevens family looks forward to the trip each year, and they 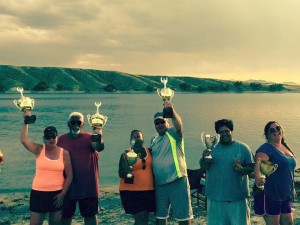 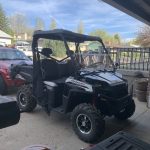 really feel cheated out of summer if they don’t get to go. They have a traveling trophy for each event, and it is a fight to the finish to see who will take that trophy home this year. Everyone hates to lose, because to win means that you get bragging rights for a whole year. Now that can be bad for the losers. That said, we wish everyone good luck this year. Today is Mike’s birthday. Congratulations on becoming a grandpa this year, Mike. I know you are loving it. Happy birthday Mike!! Have a great day!! We love you!!