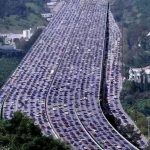 Living in Wyoming, the one thing we can be sure of is that traffic jams are extremely uncommon here. About the only way we are going to have a traffic jam is if there is an accident at what we call rush hour…for lack of a better word. A few hours south of us, you mike find a traffic jam as you travel through Denver, Colorado during a real rush hour. Nevertheless, even traffic jams in Denver almost don’t qualify compared to other places on Earth. I have tried to think of what it might be like to be in a really bad traffic jam. I have been in some that kept me sitting for over an hour, but even that was nothing compared to the longest traffic jam in history.

China is one of the biggest automotive markets in the world. That booming market has a downside to it too, however. It is estimated, that in 2015, there were no less than 7 million cars on the road in Beijing. Of course there are many more now. What’s more, nearly 14 million cars are purchased each year, while 650,000 vehicles meet the road every month. It’s like saying: “Hey, everybody in Beijing must have a car. No, make that two!.” The government has tried to stop residents from buying so many cars, but they haven’t had much luck with that. With all the cars on the road, traffic jams were inevitable. Nevertheless, I don’t think anyone could have predicted just how bad those traffic jams would become. In August 2010, China was crowned the unofficial “host” of the mother of all traffic jams, with a huge car panorama that stretched for more than 62 miles and lasted for 12 days. I’m quite certain that no one could have expected this, now could the motorists be prepared with food and water.

It all happened on the Beijing-Tibet Expressway near Beijing. The highway was initially designed to be used exclusively by trucks, but due to the growing number of vehicles, passenger cars started using it too. Ironically, the cause of the huge traffic jam was the road work on the highway. Trucks carrying construction supplies to Beijing, most of them supposed to be used on the expressway in order to ease traffic, were blocked at the exit, thus causing a traffic jam that lasted over 12 days. No clear statistics concerning the number of stranded drivers were given, but instead reports published on the web at that time claim that some of the cars advanced with a speed of 2 miles per day! That is shockingly slow!!

People who could started to take advantage of the situation by selling food and water to drivers. The prices were extremely high and some of the drivers even refused to buy the supplies. That was not a good idea, because in those cases they were robbed or even stabbed. Twelve days in a traffic jam is a lot, that’s pretty 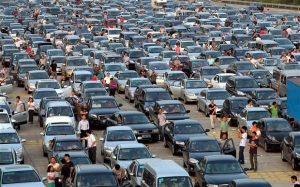 clear, and even if some drivers already had bread and cigarettes as a method of precaution, everybody had to buy at least a cup of water. The prices were astronomical, and the whole situation was insane. Strangely, authorities actually expected the traffic jam to last about a month. I guess 12 days wasn’t too bad after all. Surprisingly, according to the Guinness World of Records this isn’t the longest traffic jam in history. A previous episode that took place in France, spanning from Lyon to Paris, is regarded as the biggest jam ever. It stretched for 109 miles and happened on February 16, 1980. The reason, poor weather and the huge number of cars on the French Autoroute.