One of the weapons of naval warfare that all of us know about is the torpedo. Beginning in the 1870’s, torpedoes were rapidly introduced into the navies of many states and soon became the primary weapon of destroyers, submarines, and torpedo boats, cruisers, and ships of the line of that period were also armed with torpedoes. Torpedoes were first used by Russian vessels in the Russo-Turkish War of 1877–78. So torpedoes weren’t new on March 26, 1941, when Italy attacked the British fleet at Souda Bay, Crete, using these new detachable warheads. These torpedoes were different however, and I can only imagine how the men on the deck of the British cruiser must have felt as they watched the streaking torpedo coming toward them.

The difference between the torpedoes of old, and these new torpedoes, was that these were manned torpedoes. No, there weren’t men on the torpedo known as the Chariot.” Nevertheless it was unique. Primarily used to attack enemy ships still in harbor, the Chariots needed “pilots” to “drive” them to their targets…basically a guided missile system…but in a very primitive form. Sitting astride the torpedo on a vehicle that 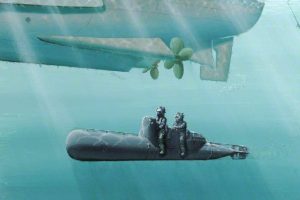 would transport them both, the pilot would guide the missile as close to the target as possible, then ride the vehicle back, usually to a submarine. The Chariot was an enormous advantage, because before its development, the closest weapon to the Chariot was the Japanese Kaiten–a human torpedo, or suicide bomb, which had obvious drawbacks. I can’t imagine being ordered to pilot that one, but then the Japanese were known for their suicide attacks.

The Italian attack was just the first successful use of the Chariot, or any other manned torpedo, although they referred to their version as Maiali, or “Pigs.” On that March day, six Italian motorboats, commanded by Italian naval commander Lieutenant Luigi Faggioni, entered Souda Bay in Crete and planted their Maiali along a British convoy in harbor there. The British cruiser, York was so badly damaged that it had to be beached. The manned torpedo system proved to be the most effective weapon in the Italian naval arsenal, and it was used successfully against the British again in December 1941 at Alexandria, Egypt. Italian torpedoes sank the British battleships Queen Elizabeth and Valiant, as well as one tanker. They were also used against merchant ships at 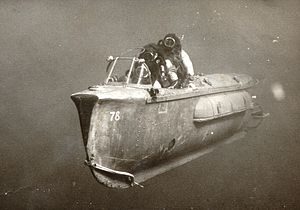 Deeply angered, the British avenged themselves against the Italians, by sinking the new Italian cruiser Ulpio Traiano in the port of Palermo, Sicily, in early January 1943. An 8,500-ton ocean liner was also damaged in the same attack. After the Italian surrender, the use of the manned torpedo continued to be used by both the British, and later the Germans. In fact, Germany succeeded in sinking two British minesweepers off Normandy Beach in July 1944, using their “Neger” torpedoes. These would be the best torpedo, until the guidance systems could be invented.