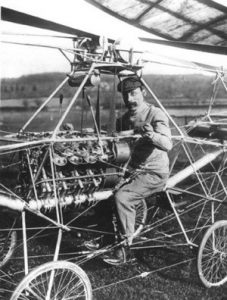 After the Wright brothers discovered a way to make a plane fly, all bets were off as to where the future would take us. It didn’t take very long to find out either. By 1907, a man named Paul Cornu came up with an entirely different type of aircraft, and built the Cornu Helicopter. As most of us know these days, the helicopter is a rotary-wing aircraft that creates its own lift. The Cornu helicopter was an experimental helicopter that was built in France. The craft had an open framework, that obviously didn’t provide much protection from the elements, and so was somewhat limited in when it could fly, but then there are still times when a helicopter can’t fly, so I guess that not much has changed in that respect.

Cornu was a bicycle maker, and so he built his craft around a curved steel tube that carried a rotor at either end, and the engine and pilot in the middle. Power was transmitted to the rotors by a drive belt that linked both rotors and spun them in opposite directions. Control was to be provided by cables that could alter the pitch of the rotor blades, and by steerable vanes at either end of the machine intended to direct the down wash of the rotors. On November 13, 1907, the helicopter was ready for its test flight. The Cornu helicopter is reported to have made a number of short hops, rising perhaps 5–7 feet into the air and staying aloft for something less than one minute…just long enough for Cornu to learn that the control systems he had designed were ineffective. He abandoned the machine soon thereafter. I find it sad to think that, while the design wasn’t going to work in it’s present form, it was certainly not something to give upon. I’m reminded of the old saying, “If at first you don’t succeed…try, try again.” Perhaps, if Paul Cornu had kept trying, he could have succeeded. 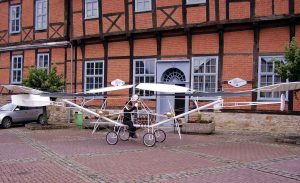 Modern engineering analyses have demonstrated that the Cornu helicopter could not have been capable of sustained flight. The design was flawed, nevertheless, in order to commemorate the centenary of his achievement, a replica of the helicopter was constructed by the École supérieure des techniques aéronautiques et de construction automobile (ESTACA) and presented to the Musée de l’Air et de l’Espace where it was placed on display on December 15, 2007. Another replica was also built. This one by the Hubschraubermuseum Bückeburg (Helicopter Museum of Bückeburg) to pay homage to the merits of Paul Cornu. It has been on display there since November 13, 2007. Though its fight was short, it did fly, after all.